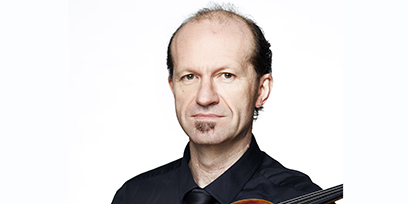 Adrian teaches Violin/Viola at St Andrews Cathedral School, donates time regularly to youth groups & the Sydney Youth Orchestra, and teaches privately. He has presented seminars on improvisation at The Sydney Conservatorium of Music and specialises in assisting with audition preparation for professional Orchestras.

Fun fact: Adrian has a particular chair which he has used since he started with the Orchestra. A couple of colleagues decided, daily for as long as it took, to grind some height from the two front legs gradually making them lower, enough that he wouldn't notice immediately that something was wrong. Eventually the evening came when Adrian sat on the chair and more or less, very slowly, he slid straight off.