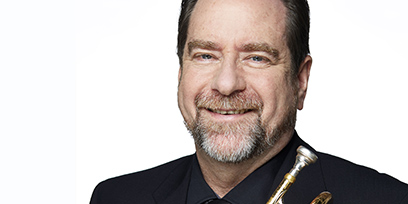 Brian Evans holds the position of Principal Cornet in the Opera Australia Orchestra. Brian Evans was born in Sydney and commenced his music education at the age of seven. His trumpet teaches included Gordon Webb, Daniel Mendelow and Arthur Stender. Brian was a member of the ABC National Training Orchestra in 1974/75, before joining the Orchestra in 1975 on 2nd trumpet. Currently he is Principal 3rd trumpet/cornet, a member of Opera Australia Brass, and founder of Trio Australis.

Brian is an active teacher s and has lectured in China, Japan and the USA. He has performed as soloist in Australia, China, the USA and Europe. Brian is affiliated with a number of organisations including The Australian Trumpet Guild (founding president), International Trumpet Guild (Secretary 2007-2011), Vice-President/President 2015-2017) (He hosted 2010 ITG Annual Conference, Sydney). Brian has played trumpet and/or cornet in all major operas and ballets with the Orchestra since 1975. Brian is listed internationally in Friedel Keim’s  Das große Buch der Trompete (Schott); and David Hickman’s Trumpet Greats (Hickman Music Editions).

Fun fact: Brian recalls a performance Tosca where there was a small fire - candles were the culprits. Once extinguished, Stage Management needed to remove them, one by one, hand visible through the scenery while the show continued, to re-light them ready for Scarpia's eventual demise and their being used to form the cross marked by his body.