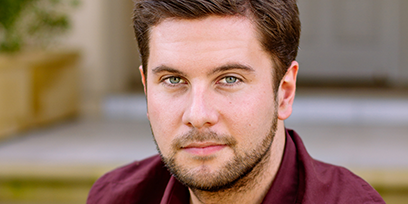 At 30 years of age, Tamworth based singer Rob McDougall has an impressive list of musical achievements to his name. Having amassed performance credits throughout Australia, Europe and America, Rob continues to build a reputation as a skilled and versatile musician, actor and conductor.

Rob initially studied International Relations and Music at the University of Sydney and Sydney Conservatorium of Music, graduating with a Bachelor of Music (Performance). In 2012, he was the recipient of the ASCAP (American Society of Composers, Authors and Producers) Scholarship. This enabled him to study music theatre in New York, taking acting and performance coaching from eminent teachers throughout the city and vocal tuition at the Julliard School. He performed at Carnegie Hall and the famous Birdland Cabaret Club, and was invited to meet and perform for Stephen Schwartz.

The following year, Rob was cast in the Australian production of Les Misérables, as Javert cover and Bishop cover, eventually taking over the role of The Bishop of Digne in 2015. Later that year he was a finalist for the Rob Guest Endowment Award. He then performed the role of The Proprietor in the Hayes Theatre Company production of Assassins, joining them again in 2018 for an extremely successful season at the Sydney Opera House.

In 2017 Rob was choral conductor on the NSW West of the Divide tour of Europe, conducting in venues throughout Vienna, Salzburg and Prague. He conducted a similar tour of Vatican City, Italy, Slovenia and Croatia in 2019. He has also toured nationally with the Ultra Swing Lounge Big Band. As a passionate advocate of regional education in the Arts, Rob gives a great deal of time to ensuring regional students have the same musical opportunities as their city counterparts. He regularly gives workshops for the NSW Department of Education, and is the featured artist coordinator and conductor of CAPERS (Creative Arts in Public Education, Regional Spectacular) in Tamworth.

More recently Rob was a guest artist on BRAVO – Cruise of the Performing Arts, on the bill with Daniel Belle, Bryn Terfel and Marina Prior, and toured his new cabaret I’ll Be Seeing You. This year Rob returns to the role of Javert in Les Misérables for Packemin Productions at Riverside Theatres.