Opera lovers are in for a treat when American director Julie Taymor’s breathtaking production of Mozart’s The Magic Flute, originally created for the Metropolitan Opera in New York, opens at the Sydney Opera House in January. Like her Tony Award-winning The Lion King, this Flute production is a visual extravaganza that incorporates large puppets and physical theatre. To add to the excitement, this is the first time in the Met’s history that it has allowed another opera company to recreate a production already in its repertoire.

The Magic Flute premièred in 2004, and Taymor returned to the Met soon after to create an abridged version designed for an HD telecast that was screened during the school holidays. This is the version that OA is doing. OA resident director Matthew Barclay, who is directing Taymor’s Flute for Opera Australia, says that for the telecast the director tightened up her original production for maximum impact. “The abridged version became a classy and very appealing piece of physical theatre,” he says. Sung in English, it cuts about 30-45 minutes from the music and is ideal for families.

Taymor’s work is influenced by the masks and puppetry of Bali, where she lived and studied for four years, and it has a broad, visceral appeal – her Lion King played to full houses of families for almost a decade.

This October, Barclay visited New York, where he had meetings with key players in the Company’s Flute production. Talking to its resident director, technical director, revival choreographer and dance director provided insight into the production and the technical challenges of staging it.

Barclay says: “This is going to be a Magic Flute like no Magic Flute that we’ve seen. Julie Taymor has brought to life an imagined world of human and animal characters that are vividly real. They take many weeks of rehearsal to ‘conjure up’, but I’m sure they’ll delight Australian audiences.”

This spring, OA’s Workshop has been building the Flute set, designed by George Tsypin, who was responsible for the Company’s acclaimed  2005 production of Prokofiev’s The Love for Three Oranges. Tsypin’s massive design emphasises the opera’s symbolic world, employing the geometry of Masonic imagery, especially the circle, the triangle and the square, and moving these shapes around the stage kaleidoscopically to create jewel-box spaces that frame the singers.

Since Taymor’s piece of theatrical wizardry is to become part of OA’s permanent repertoire, the Company decided to create its own set, costumes and props, rather than to hire them from the Met. Shipping off Tsypin’s fragile set, which the designer has described as “a crystalline temple floating in space, with the abstract elements made of transparent, glass-like material”, would have been impossible anyway. “In New York, it took a large amount of patience and ingenuity to figure out how to turn conceptual sketches into a set that cannot stand upright, yet is able to revolve and move like crystal floating though space,” Barclay says.

Tsypin, who visited Australia in 2005 to work on Oranges, is returning to oversee the Flute set transfer to the stage, and to attend in-theatre rehearsals. Barclay says: “He’s really thrilled that OA is building his Flute set; he told me in New York that he considers OA’s workshop to be one of the best in the world.”

OA Head of Props, Mat Lawrence, has been rebuilding Taymor’s exquisite puppets, which will be operated by a group of nine men and five women – all dancers – either as a harness or fixed to their body. Barclay has been rehearsing the dancers in Sydney while flying down to Melbourne intermittently to rehearse the principals, where several of them have been performing in Don Giovanni. Lawrence talks about the preparation of props for this production in the video below.

The production’s biggest challenge will be to put it on in a repertory environment. As Barclay says: “In a commercial run you could adapt the theatre and fine tune everything, so that the show can run really smoothly. But in rep, you change shows every night, which is very challenging when you’re dealing with such a complicated piece of theatre. In most productions, focusing the lights takes a couple of hours; in this Flute it took Met lighting technicians the whole day. ”

Those in the know stress that it’s well worth the effort. The New Yorker’s Alex Ross wrote of his experience of seeing Taymor’s “deeply dazzling vision”, that when he got home, his impulse was to write, “This Flute’s a hoot! Run, don’t walk!” But there were only a few three-hundred-dollar tickets left, and these were quickly snapped up. It would have been pointless, Ross lamented, to urge New Yorkers to make a dash for the Box Office.

Fortunately this is not the case in Sydney – yet. Our advice to our readers is: “Run, don’t walk!” 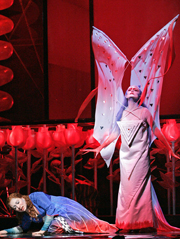 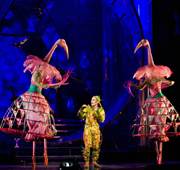 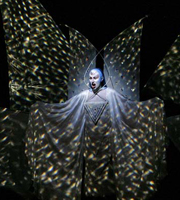 The trouble with Donna Anna