To 21st-century audiences used to Madonna and Lady Gaga, the news that the waltz was once considered a revolutionary dance, might come as a surprise. Yet that’s exactly what it was when people first began to dance it, says Stuart Hopps, choreographer for Giles Havergal’s new production of Franz Lehár’s The Merry Widow, which runs at the Sydney Opera House until early November.

“It’s hard to imagine nowadays, when we’re used to modern dance in which we use every part of our bodies and throw ourselves against each other, how shocking and daring the waltz was in its time,” he says.

Until its arrival, all social dances were done à deux, that is, the lady stood to the right of the gentleman and the dancers went forwards and backwards and sideways, occasionally turning to face each other at arm’s length.

But in the waltz, the woman faces the man, and he’s allowed to hold her around the waist. “The waltz revolutionised social etiquette because a gentleman was now allowed to hold a lady against his body, when for hundreds of years, they were not allowed to do that,” Hopps says. Add to that the fact that waltzers turn, spin and get giddy, and combine it with drinking Champagne, “and you get the picture – they got high.”

Judging by the way David Hobson and Amelia Farrugia effortlessly glide across the floor at Sydney’s Australian Hall, where they rehearse with Hopps on the day Allerta! visits, waltzing is a piece of cake.

Nothing could be further from the truth of course. “Waltzing is actually very difficult,” Hopps says. “Because of the three beats, you start with the impetus on the right leg, then change and lead with the left. To complicate things, one of the steps goes backwards. And you have to spin. For non-dancers, all of that amounts to a big ask.”

Hobson and Farrugia asked him to assume that they knew nothing about dancing, so he started them off with a basic step – forwards and backwards, then turning – without holding on to each other. “They picked it up very quickly, but then I put them together, and that was more difficult.”

When he asks the singers to move to the centre of the rehearsal space, Farrugia, who is wearing a voluminous rehearsal skirt, puts her hand through the loop at the end of its train and picks it up. The rehearsal pianist begins to play again and she and Hobson resume their waltzing, the skirt turning and swirling with them.

Catching her breath as Hopps talks tempo to the rehearsal pianist, Farrugia says: “The challenge of waltzing in big frocks is that they’re quite heavy and they come with corsets that squeeze you in physically. Having to hold the train up while you dance also gets you into tricky situations with your arm and your fan and generally with negotiating the costume. But it looks so stunning, it’s all worth it!”

Hobson adds: “The waltz was much harder to learn than anything I did in Dancing with the Stars because it has to be so beautiful and graceful, like a swan gliding on a lake. The difficulty is that you can’t do the step on your own; you have to do it with a partner and you have to avoid treading on her toes.”

As the music begins to play again and the singers resume their waltzing, Hopps says: “They’re very exposed; everybody’s waiting for the Merry Widow Waltz, so they have to be perfect at it. But they’re very disciplined and professional and talented.”

Professional dancers are expected to dance at any speed that they’re asked to, yet that rule does not apply to singers, whose pace has to be negotiated with the conductor. “The music has to build yet the dancers can’t fall on the floor,” Hopps says, with a smile. He’s enjoyed working with Widow conductor Andrew Greene, who understands this principle.

Having choreographed four Merry Widow productions before this one, he says it’s “terrific” to be able to revisit a work that you love. “Merry Widow is a serious love story, but it has to be done with elegance, lightness and wit, which means that you have to strike a balance between being light and being silly. Of the five productions that I’ve done, this one strikes the best balance.”

The Merry Widow is showing at the Sydney Opera House from 4 August to 2 November: Click here for more information and tickets. 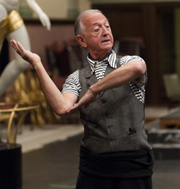 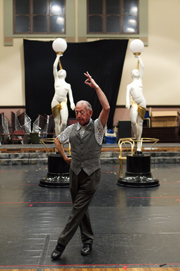