Allerta!: The role of Lady Macbeth is notoriously difficult to sing. Why is that?

Elizabeth Whitehouse: It’s the most difficult role that I’ve ever tackled. The challenge is that you need three different voice types to sing it: dramatic soprano, lyric soprano and coloratura. If you have a big voice, you’ll find the lyrical parts challenging.

A: This being a role debut for you, what were the biggest obstacles that you had to overcome in preparing it?

EW: To lighten my voice in the coloratura parts. That was a real challenge.

A: What do you enjoy about performing the role?

EW: Lady Macbeth is such an interesting character – she makes this extraordinary journey from being strong at the beginning to just breaking down at the end. She’s very feminine and she knows exactly how to manipulate her husband; she certainly wears the pants in their marriage.

A: In Macbeth, Verdi’s stated aim was to shape the vocal line to suit the dramatic purpose – vocal beauty was not his goal. Writing about the role of Lady Macbeth, he argues against casting a singer with a “clear, limpid, strong voice”, and says he would rather that Lady Macbeth didn't sing at all; that he wanted her voice to be “rough, hollow, stifled...”. When preparing the role, to what extent were you influenced by these remarks?

EW:  When Macbeth premièred [in 1847], it possibly was acceptable to make ugly noises on stage for the sake of the drama, but nowadays nobody wants to pay a lot of money to hear Lady Macbeth sing in a rough and stifled voice – in Germany you’d be booed off the stage. You can colour your vowels to make them sound really dark and menacing, and you can sing through your teeth – you can be dramatic without being ugly.  As for casting someone who “didn’t sing at all”, you would never, ever get away with trying to sing a major operatic role without a trained voice today.

A: From a voice production point of view, how much of a challenge is it to make ugly as well as beautiful sounds in the same production? To sometimes sing with a “clear and strong” voice, and sometimes sound “rough, hollow, stifled”?

EW: That’s not difficult at all; it comes with experience. If you perform the whole gamut of the repertoire, from early to contemporary music, you learn exactly what you have to do to produce a particular sound – how to make the voice dark, light or white.

A: Would you say that this is a role that demands risks of a soprano?

EW: Yes, but you need experience to be able to take vocal risks. I don’t think a young singer should sing it at all; it’s for a more mature voice and a mature person because you need life experience to interpret all the character’s facets.

A: Your repertoire is incredibly wide – everything from Beethoven, Verdi, Puccini and Wagner to Strauss and Berg, and also the Slav, Russian and English repertoire. Is it difficult to switch among so many styles?

EW: Switching from one style to another is not hard. If you’re tied to a German opera house, as I was as a young singer, and you sing ten months of the year, you very often perform two to three different roles a week while learning another. Such a schedule quickly teaches you to become stylistically flexible. These days singers tend to specialise in one area. When I was a young singer, that was not an option.

A: You have worked with some of the opera world’s greatest opera conductors, including Zubin Mehta, Riccardo Muti, Sir Simon Rattle, Jeffrey Tate and Christian Thielemann.Which ones have made a particularly strong impression on you?

EW: I loved working with Sir Simon Rattle, as Tove in the Gurrelieder at his first concert as Chief Conductor of the Berlin Philharmonic. That was an incredible experience. I also enjoyed working with Riccardo Muti in Fidelio and Götterdämmerung. Muti would ask you where you wanted to breathe and mark it in his score, unlike some conductors, who would tell you where you are to breathe. Both conductors are charming men.

A: You have sung in all the great houses in the world. Which if any ambition remains unfulfilled?

EW: I would love to sing Isolde.

A: Having studied at the Sydney Conservatorium of Music, you had the bulk of your early professional career in Germany. How did that come about?

EW: I went to Vienna to study music and work as a clerk for the UN, and from there I went to Germany.

A: What are some of the most important skills that you learned during your time as an ensemble singer in Germany?

EW: I learned discipline and a thick skin. You need both in this career! [Laughs]

A.   What is the attraction in performing with Opera Australia?

EW: I love being home and singing at the Opera House, where I always get a warm welcome. And I enjoy Opera Australia’s professionalism. It’s a very well run company. Australia is still my home, despite the fact that I’ve lived elsewhere for a long time.

A: Where is home, other than here?

EW: I live in Nuremberg, just over an hour from Munich. It’s a beautiful Bavarian town and it has a very good airport. [Laughs].

A: When you’re not singing, what else do you do?

EW: Opera singing is very time consuming – you have to practise every day to keep the voice going. That limits your life a little. But when I don’t have a project to work on, I like to cook and entertain and go to Greece with my husband, [who is Greek]. 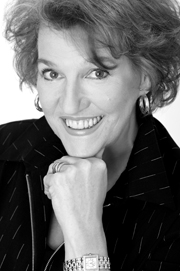 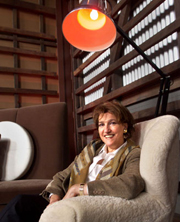 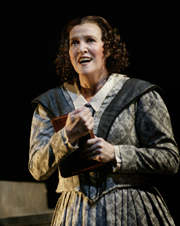 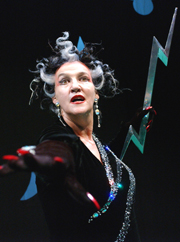