Getting the word out about Bohème

Getting word out about Bohème

In the arts, even the bravest marketing team would baulk at the prospect of having to sell $7 million worth of tickets for a new La bohème production. At the Opera Centre in Surry Hills, OA National PR and Publicity Manager Imogen Corlette and Senior Publicist Myriam Conrié nod vigorously when asked if, during the Company’s recent Melbourne spring season, they felt the pressure of being relied upon to help draw in such a large audience.

Says Corlette, who came to OA after a career promoting musicians at Musica Viva and the Sydney Symphony, and film stars at Universal Pictures: “In Melbourne we had three months to sell all those tickets. We pitched stories far and wide to attract old supporters as well as draw in new audiences.”

In Sydney, Bohème is being promoted as vigorously.

Conrié, who before joining OA worked on big consumer brands like MasterCard and McDonald’s, in PR agencies in her native France and here in Sydney, where she and her husband migrated five years ago, says good PR is about finding and telling stories.“Getting exposure for key artists in mainstream media is a given. It’s about how you’re going to go beyond that to get wider coverage.”

In Melbourne, she suggested a story to Time Out, focusing on the food element in Bohème’s hawkers’ scene and linking it to a story on where to grab a bite before a show.

Similarly, after meeting Takesha Meshé Kizart, Mimì in Bohème, the women quickly realised that the soprano had a penchant for fashion. “So we took her shopping, which was very tough,” Corlette says, with a laugh. Kizart discovered Sass & Bide, who kindly agreed to fit her out for opening night. “She looked gorgeous and wrote about the outfit on the OA blog.”

The women also kept an eye on media trends and followed up when opportunity knocked. Says Conrié: “At one point there was a discussion about nudity in theatre, and since there are topless women on stage in Gale Edwards’s production, we rang up a few papers and suggested that nudity was not necessarily about shock value. They took it up, and OA became part of the discussion.”

If it’s important to pitch far and wide, it is as important to provide riveting reading matter for opera buffs. “Good PR means talking to different markets in different ways,” Corlette says. “You don’t want to pitch a general angle for a very informed audience and you don’t ever want to talk down to people. Fashion and food is for our wider audience, but we tried to create a meaningful context for our regulars too. For example, we pitched some stories about the Weimar Republic, the period in which Gale Edwards set the production.”

Keeping track of who is doing what is crucial, Conrié adds. “We plot out angles and strategies –we’re very careful about not giving anyone a story that feels second best.”

If identifying and selling stories is the fun part of doing publicity, making them happen can be a little more challenging. Says Corlette: “One result of trying to attract a broader audience for Bohème is that we have more media interest than we normally would, and a lot of journalists who are not used to working with us. So we have to be very meticulous about how we set up interviews.”

Putting on a show requires a four to six-week rehearsal period, with complicated schedules that involve the entire company. It’s not unusual to have six to eight productions in process at once, four on stage and four being developed, with many of the same people involved in all of them. “We have to pick out whatever little time we can within the schedule, which can be challenging when you’re trying to accommodate journalists who often work on a day-to-day basis,” Corlette says. “It can be a mad scramble!”

Conrié says: “Often it has to do with getting access to the wig, the costume and the stage, which requires that five other people are involved as well.

Thus, what starts off as a request for a 15-minute interview, ends up taking two hours and involves ten different people, from singer to stage manager to wigs and wardrobe. “We’re determined to make every single story happen,” Corlette stresses. “Who knows, you might reach five new readers with that story, who may discover opera for the first time.”

Artists are generally very cooperative, but it does occasionally happen that a shy singer in a pivotal role is not keen to speak to media. “We’d prepare them by doing a test run with questions that they’re likely to be asked, and we’d make sure that we pitch them to a journalist with whom we know the artist is going to have a pleasant experience,” Corlette says. “And we’d give them copies of other articles the journalist has written, so they get a feel for what to expect.”

The women very rarely ask to sit in on interviews. “Journalists don’t like that,” Corlette says, adding, with a laugh: “If they’re in the room next door though, I do sometimes eavesdrop with my head to my office wall…if things hit a rocky patch, I’d rush over and ask if anyone would like a cup of tea!”

Both women say that what they love about the job is being able to follow the creative process from beginning to end. “I’ve always loved the arts; being in the heart of it is amazing,” Conrié says.

Do they stress? “Oh yes!!!” (this in unison), and as for opening night, is it all glamour? The notion leads to loud and uproarious laughter.  “It sounds glamorous, but really, by the time you’ve run around sorting out tickets and studying the VIP list and talking to artists and all the other last-minute things you have to do, you just want to put your feet up,” Corlette says.

She doesn’t of course, which ensures that she doesn’t miss that moment that makes it all worthwhile – curtain up. “When you get to know the artists in the run-up to opening night, they’re just ordinary people. But when they walk on stage and begin to sing, in front of 2000 people, you realise how incredibly brave they are. It’s their voice, it comes out of their body; there’s nothing more exposed than that. You know then that there’s nothing ordinary about them.” 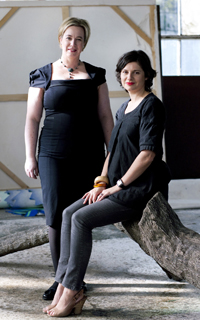 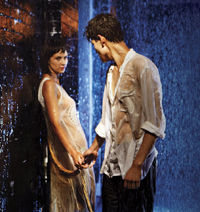 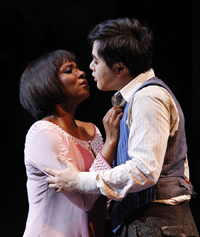 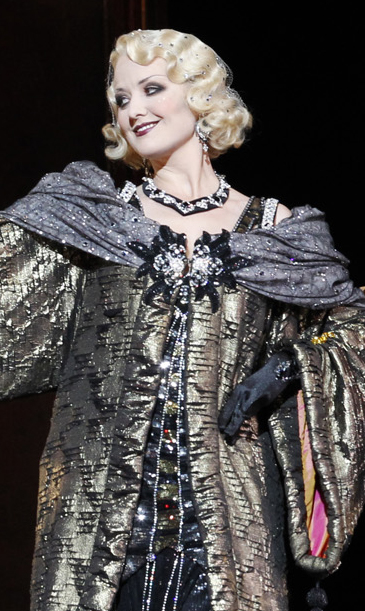 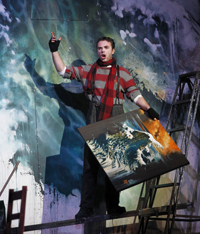 Music adds drama to Of Mice and Men

Cheryl Barker answers your questions on her career and Capriccio

"I Just Love to Sing": The Operative Word with Shane Lowrencev

Getting the word out on La bohème