Everything you need to know about one of the greatest musicals of all time, including information about the creative team, the story, the music, the history of the show and some quirky facts to impress your date.

The Jets (a gang of all-American boys) are at war with the Sharks (a gang of Puerto Rican boys), and the Upper West Side is their battleground.

When Tony (a former Jet) and Maria (a Puerto Rican girl) meet and fall in love, the pair wonder if they can overcome the deep rivalries between their communities. Optimistically, they sing: “There’s a place for us, somewhere a place for us.”

But the two gangs see it differently, and the stage is set for a bloody fight.

(Not to give anything away, but the story is based on Romeo and Juliet, and we all know how that ends.)

Tony — former leader of the Jets, a sincere young man who is trying to leave the gang lifestyle behind 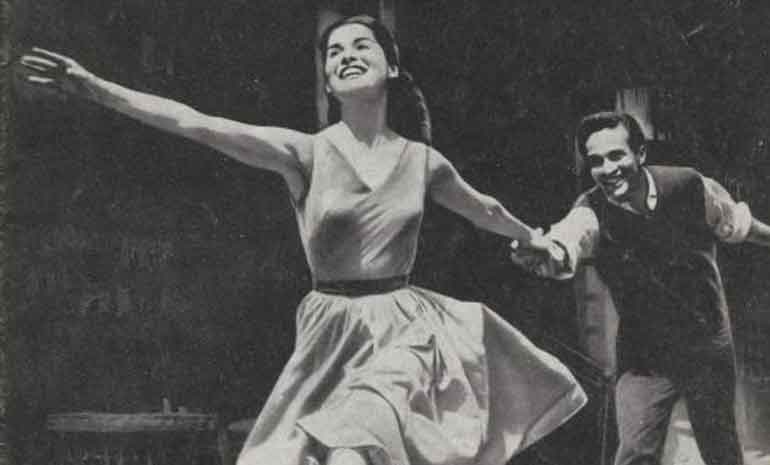 Romeo and Juliet… but with a Latin beat. It wasn’t the first idea for the project that became West Side Story, but it was the one that stuck.

The doomed love story between a Puerto Rican girl and an All-American boy struck a nerve, both for its gritty, true-to-life storyline and its inventive music. It changed the genre forever, lifting the bar for other creators.

In 1949 up-and-coming choreographer Jerome Robbins was thinking about a modern take on Romeo and Juliet. He got Leonard Bernstein (music) and Arthur Laurents (book) on board.

But their initial idea, where a Catholic boy and Jewish girl fell in love, felt stale. They abandoned the project. Five years later, Bernstein and Laurents read news reports of gang violence between Puerto Rican and Anglo-American street kids. They were inspired. East Side Story became West Side Story.

Arthur Laurents got chatting to lyricist Stephen Sondheim at a party and brought him in to meet Bernstein. Robbins had his dream team.

The four collaborated closely. Sondheim took passages of dialogue and turned them into songs. Bernstein moved songs around to serve Laurents’ vision of the story. Robbins created choreography that advanced the story, instead of embellishing it.

In 1957 West Side Story premiered in Washington. The show was a hit. Its subsequent premiere on Broadway left audiences and critics reeling. Whether they liked it or not, it was clear this musical was something special. It ran for 732 performances and then toured nationally. A production ran in the West End for more than 1000 performances.

Hollywood came knocking, and the 1961 film took a popular musical and made it a cult classic.

Where to begin? Nearly every song in the musical is a bona fide Broadway hit. ‘America,’ ‘Somewhere,’ ‘Tonight,’ ‘I Feel Pretty,’ and ‘Something’s Coming’.

West Side Story is a melting pot of different styles of music: jazz, classical, mambo, Latin American rhythms, musical theatre and opera. Bernstein’s command of these styles is what makes the score so memorable — and why orchestras love to play it.

Bernstein uses plenty of clever musical devices to tell the story in music.

One of the most important is the tri-tone, or ‘devil’s interval’, which he uses throughout the score to highlight tension and drive the story forward. The tri-tone is an interval (distance between two notes) that sounds unstable - your ear reaches for a note that would resolve it, or make it sound finished.

Can you sing this line from ‘Maria’? ‘Ma-ri-a, I’ve just met a girl called Maria’. The first two notes ‘Ma-ri-’ is a tri-tone. That’s why it sounds so gorgeous when Tony sings the ‘a’ — the uncomfortable interval is resolved.

The prologue opens with a tri-tone and a motif that symbolises discord. It reappears whenever you meet the Jets. Unlike Tony’s tri-tones, they are often left unresolved. There is violence brewing, and the music makes you feel it. Listen out when the Jets try to keep their ‘Cool’ — the song is full of tri-tones and the result is you can feel the tension in your guts.

Bernstein sets us up to feel the longing and love of ‘Somewhere’ long before that song appears in the score. If you listen carefully, you can hear parts of the song in other places: the rhythm of the line ‘Some day! Somewhere!’ in the last notes of ‘Maria’, and the melody of ‘There’s a place for us’ under the closing notes of ‘Tonight’.

By the time the pair of lovers sing ‘Somewhere’, we already know how we’re supposed to feel.

Bernstein combines these two ideas with powerful effect in the finale, where the melody of ‘Somewhere’ competes with two unresolved tri-tones. This story isn’t over. What will the gangs do next? 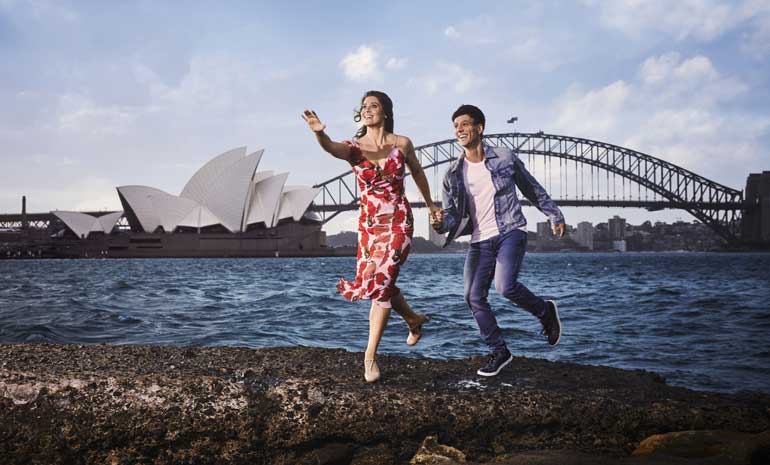 Australian set designer Brian Thomson has created a set design based around New York’s icons, from the graffitied subway cars and highway overpasses to the Statue of Liberty and everything she represents.

Australian costume designer Jenny Irwin has used colour to show the rivalry between the gangs: the Jets are dressed in cool blues and lots of denim and the Sharks and their girlfriends are dressed in hot, bright colours.

Who created the musical? 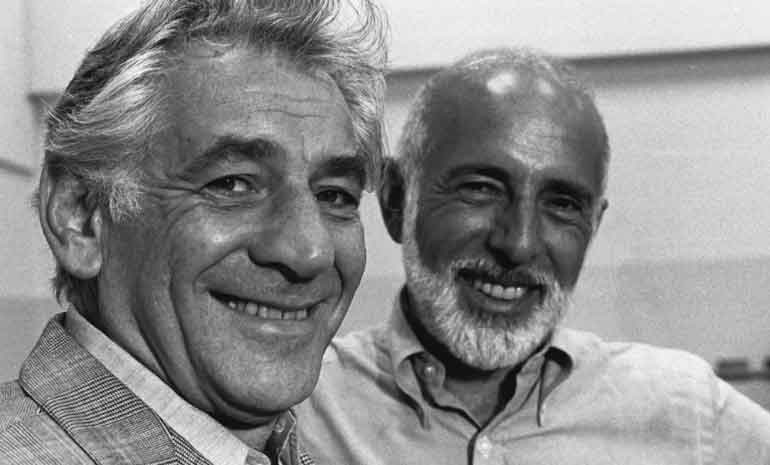 Jerome Robbins was a giant of dance and theatre, known for his innovative ballet choreography and celebrated for his impact on Broadway musicals.

He loved to dance, and he loved to tell stories. The result was choreography that explored more than how the body moves: his choreography was original, emotional, startling. His New York Times obituary praised his "genius for capturing the essence of an age".

Nowhere was that more apparent than the tense, explosive choreography of West Side Story, a project he took from idea to international sensation.

Leonard Bernstein was a lion of American music.

He was a brilliant composer, who wrote West Side Story, On the Town, Candide and a bunch of other musicals. He also wrote symphonies, choral works, chamber works, ballet scores and an opera.

He was a conductor, who became the youngest ever (and first American) Music Director of the New York Philharmonic at age 40.

He was such a talented pianist he could conduct a piano concerto from the piano, while playing.

He won 16 Grammys and a lifetime achievement award in 1985.

After one of the most distinguished careers in music history, Bernstein retired from conducting in October of 1990, suffering from lung disease. He died of a heart attack five days later.

Arthur Laurents was a playwright and screenwriter whose grasp of character and appreciation for brevity brought him early success.

He had already written several radio plays and a Broadway success before collaborating with Robbins on West Side Story. The pair (plus Sondheim) worked together again on Gypsy.

Laurents directed the hit musical La Cage aux Folles and wrote the screenplay for many classic films, including Hitchcock's Rope and The Way We Were.

He revived West Side Story on Broadway in 2009, creating a bilingual version where the Sharks spoke and sang in Spanish.

Stephen Sondheim is a lyricist and composer whose work continues to push the boundaries of the American musical. He's often called the greatest lyricist of musical theatre, and no one disagrees.

As a boy, Sondheim played with Oscar Hammerstein's son James, and the famous lyricist became a surrogate father and mentor to Sondheim. As a young man, Sondheim gave his work to Hammerstein to critique, and credits the theatre great with teaching him to write of himself, of what he knew and felt.

Sondheim was just 23 when he got talking to Arthur Laurents at a party. The young lyricist agreed to meet Bernstein, and began working on West Side Story in his 20s — a musical that would launch a still stellar career.

Sondheim is a prolific composer: Sweeney Todd, Into the Woods and Company are some of his biggest hits. His work is never formulaic, always original. He thrives on surprise.

West Side Story in a nutshell

The music: An eclectic mix of jazz, theatre music and classical forms.

The setting: The Broadway musical is set in the 1950s. This production takes some cues from the 1950s but is set in a contemporary, timeless world.

The history: Premiered on Broadway in 1957 after a run in DC. A 1961 film version became a cult classic and cemented the musical’s place in history.