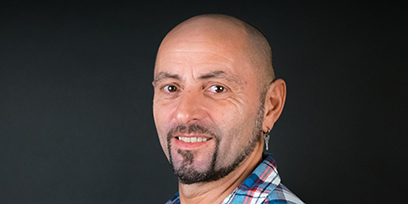 Daniel Izzo began studying singing at the age of 17 but it was with dance that he entered the Opera de Marseille in 1984. He joined the ballet until 1991 and then the ballet theater from the Capitole de Toulouse until 1994. He participated in various lyric and choreographic productions throughout France until 2004. He became a chorister and participated in the choreographies of Orange as well as in the theater of the Odeon in Marseille for many operettas.

He is also Stage Manager at the Opera de Marseille, the Opera de Monaco and the Opera de Paris. It was at the Paris Opera that he met Olivier Py in 2007 on his production of Rake’s Progress. He became his assistant for Lulu at the Grand Théâtre de Genève in 2010 which he took to the Barcelona Liceu the following season. Then Meyerbeer’s Les Huguenots at La Monnaie in Brussels in 2011 and 2012.

He was choreographer for Carmen at the Opera de Lyon in 2012 and again in 2015 as well as for Claude world Premiere of Thierry Escaich in 2013.

Fauré’s Pénélope in Strasbourg in 2015; Halévy’s La Juive in Lyon in 2016 which he will direct again with Opera Australia at the Sydney Opera House in 2020. Massenet’s Manon in Geneva in 2016, at the Théâtre National de Bordeaux and the Opera Comique in Paris in 2019. Strauss’ Salomé in Strasbourg in 2017, Wagner’s Lohengrin at La Monnaie in Brussels in 2018 and with Opera Australia in Melbourne in 2020. Verdi’s La Traviata at the Malmö Opera House in Sweden in 2018; Ponchielli’s Gioconda at La Monnaie in Brussels in 2019 which he will direct again at the Théâtre du Capitole de Toulouse in 2021.

He assisted Charles Roubaud for Aïda at the Stade de France in 2010 and at the Chorégies d’Orange for Turandot in 2012.

In 2014, he assisted Andreï Serban for the L’Italiana in Algeri at the Paris Garnier Théâtre and later Damiano Michieletto for the new production of the Barber of Seville still at the Paris Opera Bastille.

In 2017, he assisted Isabelle Partiot for Adriana Lecouvreur at the Mariinsky Theater in St. Petersburg with Anna Netrebko and maestro Valery Gergiev.