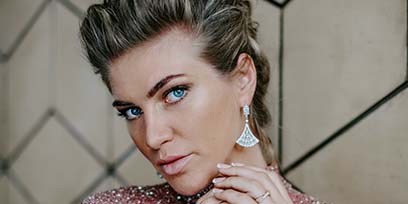 Ekaterina Morozova has been a leading soprano of the Bolshoi Theatre in Moscow since 2016, where she has starred in several important roles, such as Fiordiligi in Cosi Fan Tutte, Tatiana in Eugene Onegin, the title role in Rusalka, Donna Anna in The Stone Guest, the title role in Iolanta, Mercedes in Carmen, the Countess in Le Nozze di Figaro, Musetta in La Boheme, Tsaritsa Militrisa in The Tale of Tsar Saltan and Dalinda in Ariodante. In the current season, Morozova makes her debut with Opera Australia as the Countess.

In the 2019/20 season, Morozova sang Giulietta in Les Contes d’Hoffmann at the Semperoper Dresden. In 2018, she sang Natasya Filippovna in the new production and Moscow premiere of Mieczysław Weinberg’s The Idiot at the Mariinsky Theatre, where she has also appeared as the First Lady in Die Zauberflöte. Internationally, she made her debut at the Opéra National du Rhin in Strasbourg in 2018 as Tatiana in Eugene Onegin and at the Semperoper Dresden in 2017 as Giulietta in Les Contes d’Hoffmann.

Also active on the concert platform, Morozova has recently sung Rachmaninov’s The Bells, Beethoven’s Symphony No. 9 and Rossini’s Stabat Mater in addition to performing in recital and appearing at opera galas. She has also worked with such acclaimed conductors as Gergiev, Sokhiev, Spivakov, Vedernikov, Trevino, Letonja, Chaslin, Montanari and Rubikis, as well as directors including Borodin, Arye, Wake-Walker, Brendel, Erath and Frey.