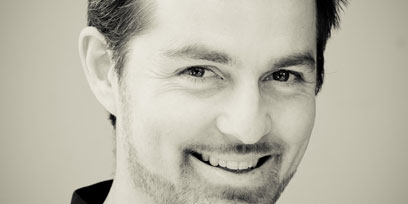 Dual Helpmann Award-winning James Egglestone is one of Australia’s finest tenors. He is a graduate of both the Victorian College of the Arts and the Melba Conservatorium of Music and a recipient of the 2004 Johnston Bequest and the 2004 Belcanto Scholarship – these awards enabled James to study in Italy and The Netherlands respectively.


He has already built up an impressive list of credits with many national and international performing companies. For the Belcanto Festival in The Netherlands, he performed Elvino in La sonnambula and Don Carissimo in La DirindinaThe Magic Flute, Nadir in The Pearl Fishers, Almaviva in The Barber of Seville and Rodolfo in La bohème.


Roles for State Opera of South Australia have included Laurie in Little Women, Ishmael in Moby-Dick and Nadir in The Pearl Fishers; for West Australian Opera – Nadir, Almaviva, Ismaele in Nabucco and Pluto in Orpheus in the Underworld; for Victorian Opera – Don Ottavio in Don Giovanni, Ferrando in Cosi fan tutte and Peter Quint in The Turn of the Screw. James’ major role debut for Opera Australia was as Lysander in A Midsummer Night’s Dream. He returns to Victorian Opera in 2020 as Narraboth in Salome.


In 2007, he sang leading roles in The Love of the Nightingale for West Australian Opera, Opera Queensland and Victorian Opera (for which he won the Helpmann Award as Best Male Singer in a Supporting Role); he won the same award in 2008 for his performance in Little Women.


On the concert platform, James Egglestone has sung the tenor solos in Haydn’s Creation, Bach's St. John Passion and the Bach Cantatas Nos. 21 and 137. In 2012, he took the tenor solos in Beethoven’s Symphony No. 9 for the Sydney Symphony under Vladimir Ashkenazy. Other appearances have included those with the Adelaide, Melbourne, Queensland, West Australian, Darwin and Canberra Symphony Orchestras, Auckland Philharmonia, Sydney Philharmonia Choirs and the Twilite Orchestra, Jakarta.