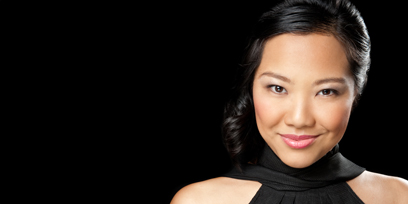 Jermaine Chau, mezzo-soprano, a recent graduate of the Lisa Gasteen National Opera Summer School in Brisbane, studied opera at the Sydney Conservatorium of Music where she took on the role as a sassy aunt Fidalma in Cimarosa’s comic opera Il Segreto Matrimonio. In 2014, she has taken the lead role in Menotti’s Old Maid and the Thief and has performed as Cecilia in Mark Adamo’s Little Women.


Jermaine attended MLC School under the guidance of music director Karen Carey. It was here that Jermaine got her first taste of opera in the lead role in Purcell’s Dido & Aeneas. Joining the Young Artist Program at Pacific Opera in 2009, she performed in Humperdinck’s Hansel & Gretel, as a spirit in Mozart’s The Magic Flute, and continues to support the company as a PO Alumni. With soprano Taryn Srhoj, Jermaine formed the operatic duo, Blush Opera, in 2013. Blush Opera performed at both Tasmanian Cabaret Festival 2014/2015; Adelaide Fringe Festival 2015 and the year culminated in the premiere of an original Paul Smith composition Fancy Me Dead at The Hayes Theatre as part of the New Music Network Mini Series.


Recently, Jermaine has performed the title role in Bizet's Carmen for Opera New England and Symphony Central Coast, and was a part of Gluck's Orfeo et Euridice for the Spectrum Now Festival in March. She delighted in bringing to life the cheeky role of Cherubino for Rockdale Opera's The Marriage of Figaro. 2016 will be a thrilling year as Jermaine makes her debut with the Willoughby Symphony Orchestra in February and joins the cast of Opera Australia’s Sydney Opera House—The Opera.