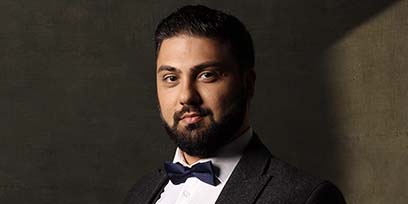 Armenian tenor Liparit Avetisyan has caught the attention of the operatic world as one of the most exciting young singers performing today. Currently the leading tenor soloist with the Armenian National Academic Opera and Ballet Theatre, he has been seen in several roles, including Alfredo in La Traviata and Don Jose in Carmen. He has also given several performances with the Armenian State Philharmonic Orchestra, including the Duke in Rigoletto, Rodolfo in La Boheme, and the tenor solos in the Verdi Requiem, Mozart Requiem, and Mahler’s Das Lied von der Erde.

During the 2016/17 season, Avetisyan made several important debuts including appearances as Alfredo in La Traviata at Royal Opera House, Covent Garden and Opera Australia, Rodolfo in La Boheme at Oper Frankfurt, and Fenton in Falstaff at Oper Köln.

Avetisyan’s engagements from the 2015/16 season included Don Jose in Carmen in China, Des Grieux in Manon in Moscow, and recitals in Strasbourg, Moscow, Vienna, Geneva and Cyprus. Future engagements include La Traviata in Sydney. Other roles in Avetisyan’s repertoire include Nemorino in L’elisir d’Amore, the title role in Werther, Lensky in Eugene Onegin, and Young Gypsy in Aleko.

In recent years, Avetisyan has appeared at the XXI International Music Festival Stars of the White Nights in Saint Petersburg, Easter Festival in Moscow, Beethoven Fest in Poland, Mustonen Fest in Estonia, and Midem Fest in France. He also performed in benefit concerts dedicated to the 100th anniversary of the Armenian genocide with Evgeni Kissin at Carnegie Hall and the Music Center at Strathmore in Washington.

Born in Yerevan, Liparit Avetisyan moved to Crimea with his parents, where he graduated from music school. From 2008 to 2011, Avetisyan studied with B. Kudryavtsev at Tchaikovsky Moscow State Conservatory, later transferring to Komitas State Conservatory of Yerevan to study with R. Hakobyants. During his studies, Avetisyan won second prize in both the Maria Biesu International Singing Competition and the III Muslim Magomaev International Vocalists Contest.

Avetisyan has collaborated with such conductors as Constantin Orbelian, Anton Orlov, Vahan Martirosyan, Lior Shambadal, Juozas Domarkas, Michael Guettler, Vladimir Jurovsky, and many others. He has also appeared in multiple solo recitals at Saint John’s, Smith Square in London.