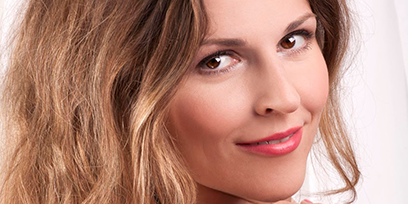 Maija Kovaļevska is a Latvian soprano. Born in Riga, she is a graduate of the Jāzeps Vītols Latvian Academy of Music.  From 2003, she resided in Italy under the tutelage of Mirella Freni.  Most recently, she has sung Mimi (La bohème) in Sydney, Melbourne and for Semperoper Dresden, Maddalena (Andrea Chénier) and the title role in Tosca for the Sigulda Festival, Verdi’s Requiem in London and Mahler’s Symphony No. 4 in Canada.

Other recent appearances include Mimi in Dresden, Alice Ford (Falstaff) at Staatsoper Hamburg, and Beethoven’s Symphony No. 9 for the Melbourne Symphony.

In 2003, Maija made her Latvian National Opera debut as Donna Elvira in Don Giovanni.  The following year, she was the winner of the 10th Riccardo Zandonai International Opera competition in Italy and was second at the 3rd Jāzeps Vītols Vocal competition in Riga.

She rose to international prominence in 2006 after winning Operalia – Plácido Domingo’s world opera competition in Valencia.

She made her Metropolitan Opera debut in 2006 – starring first as Mimi in Franco Zeffirelli’s production of La bohème and later as Euridice in Gluck’s Orfeo ed Euridice.  Thus, a shining career was launched at the Metropolitan with more than 50 performances in leading roles.  Maija was also part of the star-studded celebration concert for the Met’s 125th anniversary.

She made her Vienna State Opera debut in 2011 as Tatyana in Eugene Onegin, later singing Mimi in La bohème, Micaela in Carmen, The Countess in Le nozze di Figaro, Violetta in La traviata and Amelia in Simon Boccanegra (opposite Domingo in the title role).

Maija sang Micaela in The Royal Opera’s film production of Bizet’s Carmen, later returning to Covent Garden in her signature role of Mimi.  She also made her debut as Liù in a new production of Turandot at La Scala, Milan – as well as Tchaikovsky’s Iolanta at the Semperoper, Dresden.

Her performance as Teresa in Benvenuto Cellini was filmed at the Salzburg Festival and received a wide commercial release.  Future engagements include Verdi’s Requiem in both Modena and Melbourne and Gutrune in Opera Australia’s production of Der Ring des Nibelungen.

In Latvia, Maija Kovaļevska has received the title of Honorary Professor (giving master classes to leading young singers) and the prestigious national award – The Order of the Three Stars.