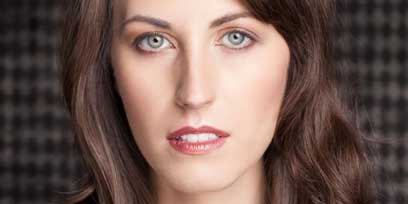 Hailed as ‘stunning’ by the New York Times, American-born mezzo-soprano Margaret Trubiano is a graduate with both a bachelor and master of music degree from Manhattan School of Music. She is the 2013 recipient of the Metropolitan Opera National Council’s Opera Omaha Award.

On the operatic stage, she has been engaged to sing Mercedes in Carmen for Connecticut Grand Opera and the Mother in Menotti’s Amahal and the Night Visitors for Rockland County Opera. She appeared as Maddalena in Rigoletto for DiCapo Opera in New York, a role she also sang for Opera New England of Cape Cod and Hannover Theatre in Massachusetts. For Opera New Jersey, she appeared as Kate in The Pirates of Penzance and the Third Lady in The Magic Flute and then appeared as Estelle in Later the Same Evening by John Musto.

For her performance as Grandmother in Griffelkin by Lucas Foss, the New York Times said she ‘projected a sense of easy authority.’

For her Lincoln Center Debut, Trubiano sang the Second Fairy in Midsummer Night’s Dream for New York City Ballet in 2012. Internationally, she was engaged by Macau Opera to appear as the Second Witch in Dido & Aeneas and appeared in Tobias Picker’s, Emmeline in Szeged, Hungary. She made her Carnegie Hall debut in Gonzales’ Missa Azteca with MidAmerica Productions.

Equally at home in Musical Theatre, she performed in the ensemble and covered Madame Giry in The Phantom of the Opera World Tour. She has played the title role in The Mystery of Edwin Drood for Corpus Christi Theatre, the Baker’s Wife in Into the Woods for Manhattan School of Music and performed Off-Broadway alongside Broadway stars Jenn Colella, Marin Mazzie, Donna McKechnie and Zoe Caldwell in Beautiful Girls with Paul Gemignani and Lonny Price.

On the concert platform Margaret Trubiano’s solo appearances include Zurich Opernhause’s opera gala, Duruflé’s Re​quiem for New Jersey Symphony and Mahler’s Symphony No. 2. She sang Vivaldi’s Gloria for the Phoenicia International Festival of the Voice and Pergolesi’s Stabat Mater for The Australian Ballet in Sydney and Melbourne.