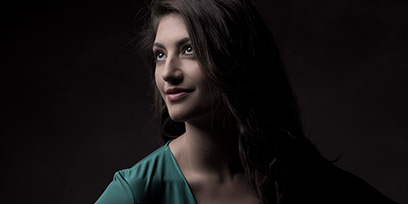 Recently returned from studying in New York, London, Denmark and Italy, Petah has worked with coaches from Opera di Firenze, Royal Opera House Covent Garden, The Metropolitan Opera and Operaen Denmark. While in Italy she performed as a soloist at Villa Miani, overlooking Vatican City in Rome. While there she was chosen from thousands of applicants to perform in the finals of the Accademia del Maggio Musicale Fiorentino.

In 2019 she recoded her debut European album for Stradivarius Milano Dischi with Trio Cavallaro, which features arrangements of arias and songs by Handel, Weber and Strauss. She also performed with Sydney’s Apollo Opera in their production of Radamisto.

Petah has studied at the Lisa Gasteen National Opera School and holds a Bachelor of Music from the Queensland Conservatorium of Music. Petah is a recipient of the Margareta Elkins award (Dame Joan Sutherland Vocal Competition).

As a current Churchill Fellow, she will travel to Europe in 2022 to pursue excellence in opera performance and develop relationships with cultures in which opera thrives, working primarily with coaches and teachers at The Royal Opera House, Covent Garden as well as travelling through Europe to work with experts in other countries. Petah’s Churchill Fellowship also focuses on bringing opera and classical music knowledge to Australians in regional and remote areas.