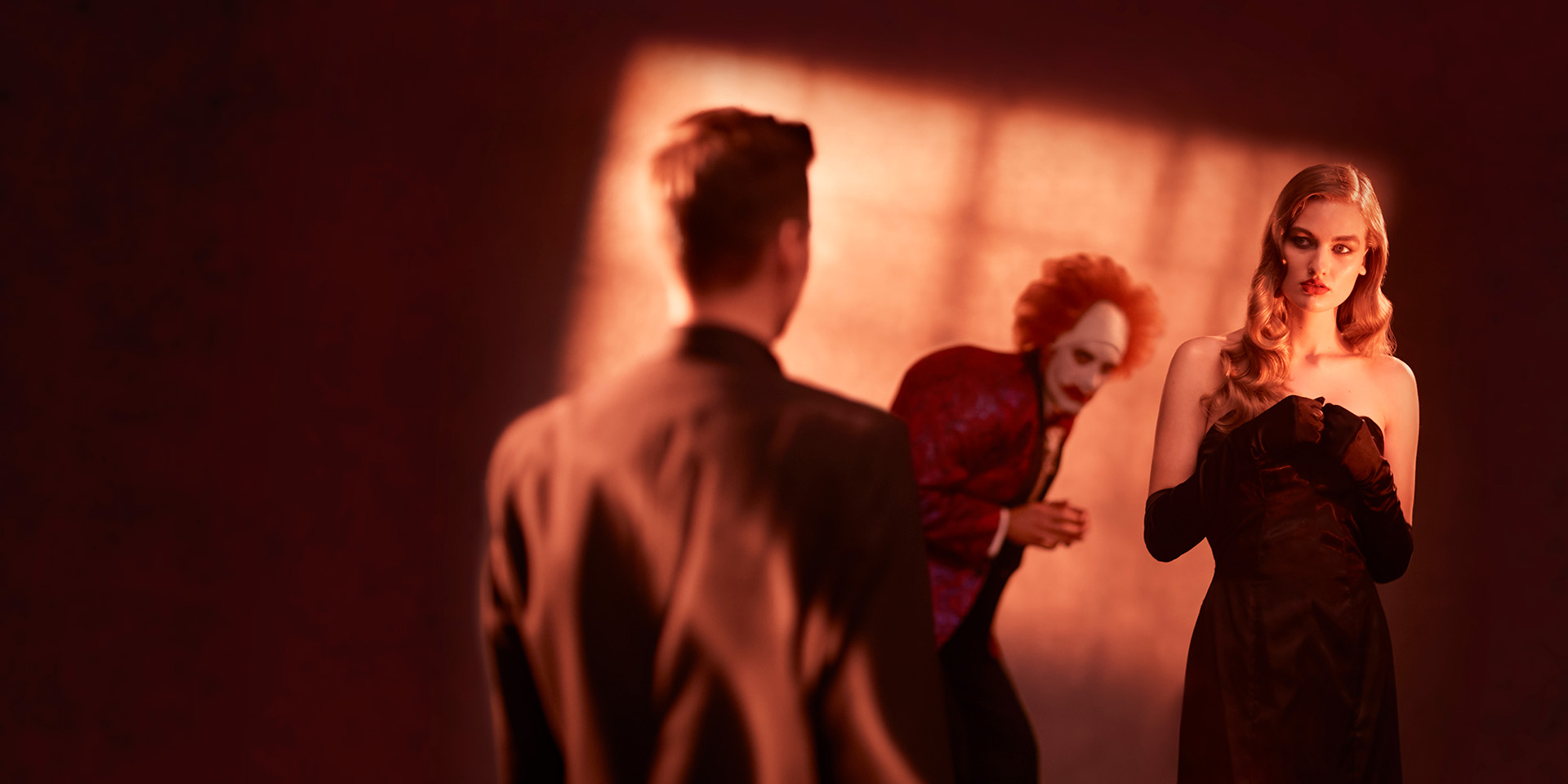 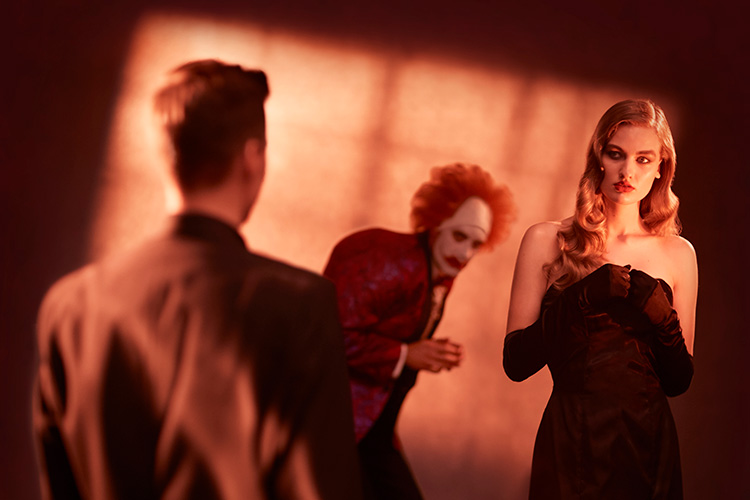 Sung in Italian with English surtitles

Approximately 2 hours and 45 minutes, including one interval.

He’s hideous. He’s hated. He’s untouchable. But in this shimmering world of secrets and seduction, can he keep the one he loves most safe?

At the Duke’s infamous parties, one man’s words light the darkness with a sinister glitter. Among the glamorous girls and greasy gangsters, Rigoletto serves his master with sharp wits and averted eyes.

From the moment he wrote it, Verdi knew he had a hit on his hands. The story has everything: royalty, loyalty, devotion, lust and revenge.

And the music? The music is sensational, so full of hummable tunes that Verdi demanded complete secrecy from his premiere cast. The tenor was forbidden from even whistling the catchy ‘La donna è mobile’ outside of rehearsals.

The morning after Rigoletto’s triumphant première, that melody rang out in the streets: a hit for ever after. The title character Verdi called the “greatest creation” in the history of theatre had found a home in a masterpiece of music.

The revolving dolls-house style set gives a cinematic detail to each scene. We’ve assembled a brilliant cast led by Verdi master Renato Palumbo. Ernesto Petti is the tortured jester at the heart of Verdi’s masterpiece. 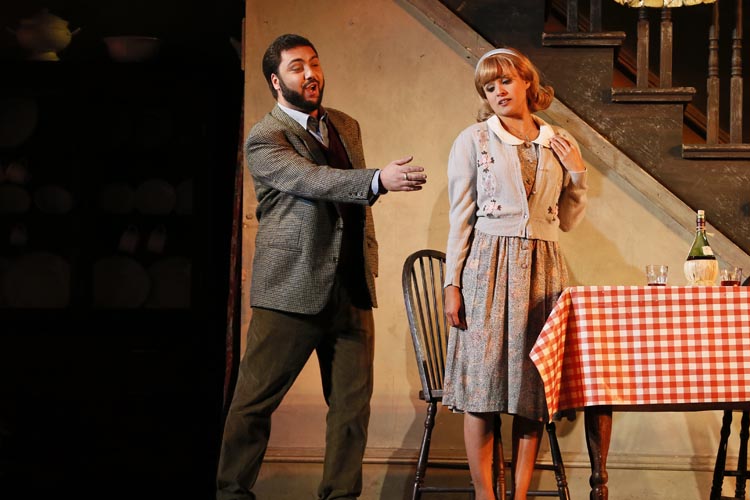 Everything you need to know about the opera many consider Verdi's masterpiece.

What happens in the story? What should I expect from the music? What is the big hit?

Scene i. The Duke’s palace

For three months the Duke of Mantua has been lusting after a lovely girl. He has found out where she lives, and that a mysterious man visits her every night, but he has no idea who she is. One woman is as good as another for the Duke, and when the Countess Ceprano catches his eye he sweeps her away before her husband’s eyes.

Rigoletto cruelly taunts Ceprano about the Duke seducing his wife. Marullo rushes in with a diverting bit of gossip: Rigoletto has a lover! Ceprano enlists his friends in a plot to wreak revenge on Rigoletto. They have all felt the lash of the hunchback’s tongue, and they are delighted at the chance to pay him back.

Monterone storms in, accusing the Duke of seducing his daughter. Rigoletto mocks the old man savagely, but Monterone will not be silenced. The furious Duke has him arrested, and as he is led away he curses both the Duke and Rigoletto.

As Rigoletto hurries home he meets Sparafucile, a hired killer who engages his sister, Maddalena, to lure his victims to their death – a fateful and disturbing encounter.

Rigoletto broods on his likeness to the killer: both are paid to destroy others, Rigoletto with words, Sparafucile with weapons. His mind is filled with Monterone’s curse, and he rails against his deformity and vilifies the Duke’s friends who hate and fear him.

His daughter Gilda runs to meet him, and inside the house he forgets his fear and depression. Gilda begs him to tell her about her mother, but he will say only that she loved him despite his deformity. Knowing that the Duke’s friends will punish him if they can, he orders Gilda never to go out alone. While he is repeating his warning to Gilda’s minder, Giovanna, he thinks he hears a noise in the street and rushes outside to investigate. The Duke, who has been waiting outside, immediately slips into the courtyard, bribes Giovanna and hides. Rigoletto comes back, and the Duke is amazed to find that Gilda is the hunchback’s daughter.

Rigoletto leaves, and Gilda confesses that she loves the young man who has been following her. The Duke steps out, saying that he is a student called Gualtier Malde and that he loves her. Their duet is interrupted when Gilda hears footsteps in the street and thinks it is her father. She makes the Duke leave and floats off to bed, rapturously repeating ‘Gualtier Malde’.

The footsteps in the street belong to the Duke’s friends, who have found the house and are plotting to abduct Rigoletto’s supposed lover. When the hunchback comes back they blindfold him, pretending that they are kidnapping Ceprano’s wife, and trick him into helping them to capture his own daughter. They kidnap Gilda, and Rigoletto tears off the blindfold and discovers how he has been deceived. Gilda is gone.

The Duke is angry and fearful: he has been back to Rigoletto’s house and found it deserted. He is sure that Gilda has been kidnapped, and for the first time his emotions are aroused as well as his carnal appetite. His friends come to tell him how they have tricked the hunchback, and the Duke realises that Rigoletto’s ‘lover’ is Gilda and that they have abducted her and brought her to his palace. He rushes away to find her.

Rigoletto enters, frantic with grief and searching desperately for his daughter. The Duke’s friends will not help him, and suddenly he realises that Gilda must be with the Duke. In despair and rage he turns on them. He curses and pleads with them, and reveals that the girl that they thought was his lover is really his daughter. Gilda enters. Rigoletto is ready to believe it was all a harmless joke, but Gilda’s distress is too deep. He sends the others away, and his daughter’s story convinces him that the Duke has raped her. But she is still desperately in love with the Duke.

Monterone passes on his way to prison, and says bitterly that his curse has not worked, since the Duke is still alive and happy. Rigoletto undertakes to avenge them both, though Gilda implores him to be merciful.

Rigoletto engages the services of Sparafucile to kill the Duke. He then brings Gilda to a ramshackle inn to witness the Duke, dressed as a soldier, making love to Maddalena. Gilda watches in horror as he seduces Maddalena. Rigoletto instructs Gilda to dress as a man and go to Verona to wait for him. Rigoletto arranges with Sparafucile to collect the Duke’s body at midnight.

But Maddalena has fallen for the sexy man upstairs in her bed. Kill the hunchback instead, she suggests. Sparafucile is outraged by his wayward sister, and while the two of them are arguing Gilda returns to the inn and overhears them. Sparafucile proposes a compromise: if a stranger calls at the inn before midnight, Sparafucile will kill him instead of the soldier.

As an act of desperation Gilda decides to commit suicide by giving her life for the Duke’s. She knocks at the door, Maddalena extinguishes the light, and Sparafucile kills her as she enters the bar. Rigoletto comes back, and Sparafucile gives him a sack that he says contains the Duke’s body. Rigoletto gloats for a while over his sinister treasure. But just as he is about to push it into the river he hears the Duke singing his song about fickle women. Appalled, he tears open the sack and finds his daughter. She is still alive. Asking him to bless her and forgive the Duke, she dies.