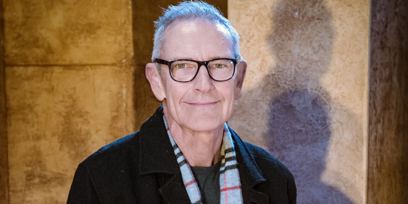 For the Sydney Theatre Company Robert has designed The Give and Take, Broken Glass, Sweet Phoebe (and for the Croydon Warehouse, London), The Visit, The Rise and Fall of Little Voice, Top Girls, Miss Julie, Racing Demon, The Revenger’s Tragedy, Hot Fudge and Ice Cream (for which he won a Sydney Theatre Critics’ Circle Award), Away (and for the Pepsico Summerfare, New York) and On Top of the World.

For the New Stages program at the Sydney Theatre Company he also designed Titus Andronicus, Time and the Room, and the dreamer examines his pillow.

For the Queensland Theatre Company his designs include the 20th anniversary production of Away (a co-production with Griffin Theatre Company), Oedipus the King, Edward Albee’s The Goat or Who is Sylvia?, The Venetian Twins, The Cherry Orchard, Phedra, We Were Dancing, The Messiah, The Fortunes of Richard Mahony, The Tragedy of King Richard III (with Bell Shakespeare Company), Bag O’Marbles, Richard II, Buried Child, Dirt, Mrs Warren’s Profession, The Skin of Our Teeth, Xpo-The Human Factor and Moby Dick.

For State Theatre Company of South Australia he has designed Blithe Spirit, Love and Human Remains, Hedda Gabler, The Club, The Seagull, 1841 (a co-production with Sydney Theatre Company) and Who’s Afraid of Virginia Woolf as well as the costumes for The Fire on the Snow.

For Company B he has designed Welcome to Broome (a coproduction with Black Swan), The Birthday Party and Savannah Bay.

As well as the original and 20th anniversary productions of Away, Robert has designed Live Acts On Stage, Europe and Room to Move for Griffin Theatre Company. For Opera Australia he has designed both set and costumes for Iphigenie en Tauride and The Abduction from the Seraglio. For Bell Shakespeare he has recently designed Measure for Measure and The Tempest.

Other design work includes Julia for Melbourne Theatre Company, The Hour We Knew Nothing of Each Other for ATYP and the Sydney Festival, Men Should Weep for the Q Theatre and The Christian Brother for Nimrod.

Robert is a graduate of Sydney University and the NIDA Design Course.