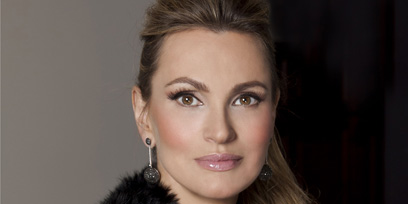 A native of Tolosa in the Spanish Basque Country, soprano Ainhoa Arteta came to international attention when she won the Metropolitan Opera National Council Auditions and Plácido Domingo’s Operalia International Competition, resulting in engagements with some of the world’s most important opera houses. She has since been heard at such theatres as the Royal Opera House, Covent Garden, Bolshoi Theatre in Moscow, Teatro Real in Madrid, Metropolitan Opera, Carnegie Hall, Dutch National Opera, Bayerische Staatsoper and Grand Théâtre de Genève, amongst others.


In the 2015/16 season, Arteta sang the Countess Almaviva in Le Nozze di Figaro at Opera de Oviedo in Spain, Alice Ford in Falstaff at Teatro di San Carlo, Lucrezia Contarini in I due Foscari at Teatro Real in Madrid, the title role in Tosca at Deutsche Oper am Rhein and Welsh National Opera, and the title role in Manon Lescaut at Asociacon Bilbaina de Amigos de la Opera in Bilbao, Spain. Her engagements for the 2014/15 season included Alice Ford at Covent Garden and Tosca at Theatro Municipal de São Paulo and Quincena Musical in San Sebastian, Spain. In the 2013/14 season, Arteta returned to the San Francisco Opera as Alice Ford and sang the title role in La Wally at Grand Théâtre de Genève and Tosca at the Teatro Comunale di Bologna.


Other performances in recent seasons include Marguerite in Faust at the Bayerische Staatsoper in Munich (with the tenor Rolando Villazón and conducted by Friedrich Haider), her debut as Tatyana in Eugene Onegin at the Palau de la Música in Valencia, her debut as Musetta in La Boheme at the Arena di Verona and at the Trieste Theatre, as well as Four Last Songs by Richard Strauss with the Orquesta Sinfónica de Tenerife.


Other notable performances include Mimi and Musetta in La Boheme, Violeta in La Traviata, Micaela in Carmen and Olga in Fedora at the Metropolitan Opera (telecast on PBS’ Live from the Met series), Magda in La Rondine at The Washington Opera (telecast on PBS’ Great Performances), Leila in Les Pecheurs de Perles in Bordeaux, Bilbao and Seattle, Violetta in Barcelona, San Sebastián, and Sevilla, Micaela in Carmen at the Scottish Opera, Gilda in Rigoletto at the Teatro de la Zarzuela in Madrid, Violeta in La Traviata and Marguerite in Faust in Cincinnati, Violetta at the Dutch National Opera, Gilda at the Michigan Opera Theater, Mimi and Marguerite at the Bellas Artes in Mexico City, Carolina in Il Matrimonio Segreto at the Perelada Festival and Countess Almaviva in Le Nozze di Figaro with Opera Pacific.


A critically acclaimed recitalist, Ms. Arteta gives dozens of recitals and concerts yearly. Among innumerable concerts, she has performed in Carnegie Hall with Michael Tilson Thomas and the New World Symphony, the Palau de la Musica in Barcelona, the Metropolitan Opera, the Perelada Festival, the Antibes Festival, and in Graz and Vienna. The soprano has also sung in concert at the White House and has appeared frequently with Plácido Domingo, including performances in Berlin, Hamburg, Istanbul, Leipzig, Madrid, Paris, Munich, Valencia, Brazil and London.


Ainhoa Arteta’s awards include “Best classical music artist” at the 5th Spanish Music Awards, the ONDAS Prize, the “Federico Romero”, the award by the Autor Foundation for her international career, “Universal Basque” by the Basque Government, Member of the Board of the Winterthur Foundation, Academician of the Royal Academy of Fine Arts of Cádiz, Member of the Board of the Orfeó Catalá-Palau de la Música Foundation, the Gold Medal of the Palau de la Música de Valencia and Artist in Residence of the Cadaqués Symphony Orchestra.