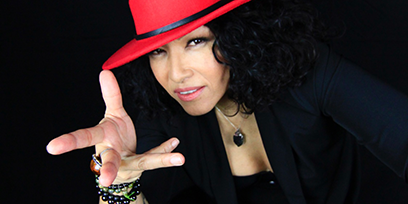 No one embodies the spirit of dance, performance and choreography as well as Akasia Ruthy Inchaustegui. From the second Madonna laid eyes on her back in 1993 for her Girlie Show Tour, this powerhouse of a performer has been none stop, being in the industry for more than 27 years. Today, Ruthy’s career has had her work with names like Madonna, Janet Jackson, Prince, Maxwell, Pink, Gloria Estefan, Santana, Mariah Carey, Celia Cruz, Puff Daddy, Cirque du Soleil, Britney Spears, Katy Perry and Taylor Swift, to name a few. Some of her TV appearances include Dancing with the Stars, The Grammys, The Late Show with David Letterman, MTV American and European Awards, VH-1 Music and Fashion Awards, AMA, Latin Billboard, SNL, Miss Universe, The Soul Train Awards, The Tonight Show with Jay Leno and more. Not limiting herself to just the commercial dance world, Ruthy was also part of the original cast of the Broadway show ‘Mambo Kings’ as well as the hit off broadway production of “De La Guarda”. Cirque Du
Soleil enlisted Ruthy to lend her expertise and skills to their MJ Immortal World Tour.

Born and raised in Peru, Ruthy danced at every chance she would get, making her imagination a world of endless limitation. Moving to NYC as a teenager, Ruthy found a whole new world of inspiration, from classical dance, to acrobatics, as well as martial arts. Her strong work ethic and ability to excel in any situation she was presented with. Eventually landed her the role of the ‘main stunt double, for Halle Berry on “Catwoman”. As a choreographer, Ruthy has contributed to films such as, High School Musical of China, I am somebody, and Go for it. On stage with, the Latin Music awards, Soul train music awards, PINK’s tour “Fun House”, Miss Angola, Miss Tourism, Latin Billboard awards, Asia’s top pop stars, Jolin Tsai’s, on her world tour, directed by Travis Payne, Ricky Martin’s Las Vegas Residency show directed by Jamie King and the Brooklynettes.

On theatre The Bonesetter daughters at the San Francisco Opera house, off Broadway Double It a new circus experience that involved acrobats and Martial artists. The opera Eugene Onegin at the Spoleto Festival, Havana Music Hall, the hit show On Your Feet at the Gateway, and the TV series Evil. She is delighted to be working with Opera Australia in this new take of Das Ring des Nibelungen by Richard Wagner, and directed by Chen Shi-Zheng