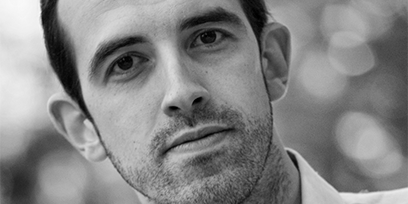 Andrea has worked as an actor, director and playwright in shows which have been played in Italy, UK, Ireland, France, Holland, Austria and USA. He is also the founder and singer of the rock band Too Much Ado, winners of the All The Rock Italia in 2013.


In Italy, he studied improvisation from 2004 to 2007 at the LTO in Orvieto, and in 2008 he studied stage direction at the CUT in Viterbo.


From 2008 he worked on stage and in street shows with many companies in Italy, and played about 20 different shows with Compagnia Teatredro (Italy). He studied and worked also with Isaac Alvarez, Ted Keijser and Milon Méla.


In 2010 he founded with Valeria Pinzi the company Fratelli Cane, for which they wrote and staged La canzone di Orlando in 2010 and Cinque pezzi facili, on Daniil Charms’s life and recklessness, in 2011. This show was one of the few selected for the fringe section of the Spoleto Festival dei Due mondi in 2011.


From 2012-2014 he studied movement, masks and bouffon with Lassaâd Saïdi at the Ecole Lassaad (Belgium).


In 2014 he was the main character of the show The Mute Quire, directed by Jenny Mok of Comuna de Pedra (Macau). The show was on stage at the Galway Fringe Festival (Ireland), winning the Best International Production 2014 Award.


In 2015 Andrea met William Kentridge and his team and became one of the two performers of Lulu, by Alban Berg, being on stage at The Met in NYC, at ENO in London, DNO in Amsterdam and in Opera di Roma. In 2017 Andrea was actor and puppeteer in Kentridge’s Wozzeck, at the Salzburg Festspiele.


Andrea is now on stage in Belgium with Agathe Mortelecq in Pourquoi c’est bien d’avoir un ananas à la maison, show about Alzheimer’s syndrome, directed by Ted Keijser. In 2019 he will perform the solo Fashion victims, about minorities, media and peanuts.