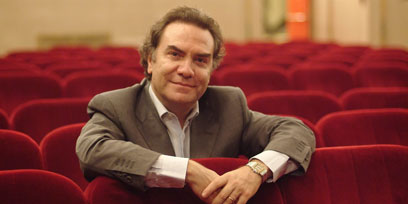 Andrea Licata has conducted many opera and symphonic orchestras in Italy and abroad, including the Maggio Musicale Fiorentino, the Orchestra Regionale della Toscana, Orchestra Sinfonica Siciliana, Teatro Lirico di Cagliari, the Royal Philharmonic Orchestra, the Festival of Two Worlds Orchestra of Spoleto and the Melbourne Symphony Orchestra. In Spoleto, he conducted the world premiere of Sarah – the contemporary opera based on the life of Marilyn Monroe composed by Paul Vy and directed by Petrika Ionesco.

In 1989, Hans Werner Henze invited Andrea Licata to inaugurate the Cantiere Internazionale in Montepulciano.  From 1991 to 1994, he was the Musical Director of Theatre Vincenzo Bellini of Catania, where he conducted concerts and operas such as Rigoletto, Aida, Bianca e Fernando, The Saint of Bleeker Street (Menotti) and La Gioconda.

In recent seasons, he has conducted Aida, Tosca, Rigoletto, Il trovatore and La fanciulla del West in Baltimore. In 2003/4, he made his Australian debut conducting a new production of Norma for Opera Australia in Melbourne with great success and was immediately re-invited for the 2004/5 season when he conducted Nabucco and La bohème. In 2005/6, he conducted Un ballo in maschera in Bari, La traviata at the Teatro Regio di Parma, Andrea Chenier at the Teatro Massimo di Palermo, Madama Butterfly with Opera Australia and La bohème in Baltimore.  More recently, he conducted Rigoletto, Un ballo in maschera, Il Trittico, Cavaralleria Rusticana and Pagliacci for Opera Australia, Ernani in Messina, Tosca in Baltimore and a new production of Lucia di Lammermoor for the New Zealand International Arts Festival.

In the 2009/10 season, Andrea Licata made his debut with Welsh National Opera conducting a revival of David McVicar’s production of La traviata and was re-engaged for Il trovatore the following season.  He also returned to the Teatro Maestranza, Seville for La traviata and conducted Tosca for Opera Australia. In 2010/11, as well as Il trovatore for WNO, he made his Swedish debut conducting Norma for the Royal Opera in Stockholm and gave performances of Tosca in Palermo in concerts with the Orchestra Sinfonica Siciliana.

Among his recordings are Jacquerie by Gino Marinuzzi, Bianca e Fernando and Adelson e Salvini (Nuova Era), Preludes, Symphonies and Intermezzos from Italian Operas, Peter and the Wolf by Prokofiev, Jeux d’Enfants by Bizet and Carnival of the Animals by Saint-Saens with the Royal Philharmonic Orchestra of London (CD).