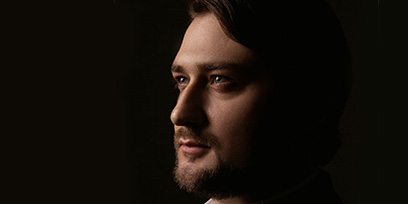 Ukrainian baritone Andrei Kymach was the First Prize Winner of the prestigious BBC Cardiff Singer of the World 2019.

Andrei graduated from the Bolshoi Young Artist Program in 2018. Within his tenure he made is role debut as Don Carlos in Dargomyzhsky’s The Stone Guest at the Bolshoi Theatre.

In the 2021/22 season Andrei will return to the Bolshoi Theatre for performances of Sadko, Bayerische Staatsoper for La Boheme, to Welsh National Opera to sing the title role in Don Giovanni and will give his debut at the Savonlinna Festival as Escamillo in Carmen.

In seasons to come he will give his house debuts at Houston Grand Opera and Chicago Lyric Opera.

Andrei gave concert performances of Tchaikovsky’s The Maid of Orleans under Tugan Sokhiev at The Bolshoi Theatre and on tour in France including Halle aux Grains, Toulouse and The Philharmonie de Paris, as well as a concerts at Opera de Nice, Opera de Toulon and a concert with the NHK Symphony Orchestra in Tokyo.

Andrei holds a degree in philosophy from the Taras Shevchenko National University of Kiev, subsequently gained a degree in singing at The National Tchaikovsky Music Academy of Ukraine (Kiev) and was a member of the Kherson Philharmonic Society (Ukraine). At the Bolshoi Young Artist Program, he also trained under Lyubov Orfenova, Semyon Skigin and Giulio Zappa.