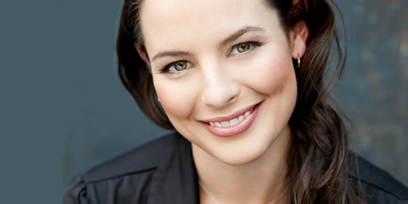 Australian born soprano Angela Brun completed an Advanced Diploma of Opera at the Sydney Conservatorium of Music in 2008, Angela was then offered the title role in Rossini’s Cinderella for Opera Australia’s touring OzOpera Schools Company for 2009.


In both 2008 and 2009 Angela was a semifinalist in the Australian National Singing Competition, receiving prizes in Italian Studies.  In July 2010, Angela was awarded the Audience Choice Prize and the Arnold and Mary Bram Australian Song Prize in the Mietta Song Recital Award.  She went on to receive 2nd place in the 2010 McDonald’s Eisteddfod Open Aria and a Melba Trust Grant. Angela is proudly supported by the Sydney Opera and Arts Support Group.


For Opera Australia, she has understudied Mabel from The Pirates of Penzance and Tytania from Britten's A Midsummer Night’s Dream.  Having been selected as the winner of the prestigious Opera Foundation Vienna State Opera Award, she worked with the Vienna State Opera from January to May 2011, performing the roles of Kate Pinkerton from Puccini’s Madame Butterfly on the mainstage, and the Waldvöglein (Woodbird) for a children's version of Wagner's Ring Cycle, the Kinderring.


Other engagements included the Queen of Night in Pacific Opera’s production of Mozart’s The Magic Flute, and Lakmé (understudy) and Rose in Opera Australia’s production of Delibes' Lakmé.  In October 2011, Angela travelled to Italy as a winner of the Italian Fellowship Award to perform the role of Adina in the Fondazione Pergolesi Spontini’s production of Donizetti’s L’Elisir d’Amore.


In 2012, Angela sang The Queen of Night in Opera Australia’s production The Magic Flute.