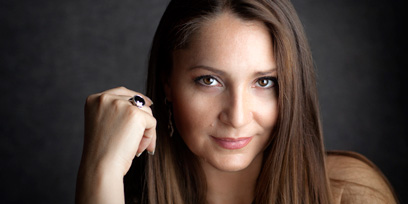 
Among her career's most remarkable performances were Le Nozze Di Figaro (Contessa d'Almaviva) in Ferrara, Otello (Desdemona) at the Salzburg Festival and at Teatro Regio in Turin with Claudio Abbado, Così Fan Tutte (Fiordiligi) at the Wiener Staatsoper and at Ravenna Festival with Riccardo Muti, also with Colin Davis at Covent Garden.


She sang Don Giovanni at Salzburg Festival with Lorin Maazel, Turandot (Liù) at Opéra Bastille with Georges Prêtre and a tour with the Maggio Musicale Fiorentino and Zubin Mehta. At the Metropolitan she was Desdemona in Otello with James Levine, a role which she has performed in Brussels (Pappano), Wien, Nice, Florence (Mehta), and in which she made his debut in Munich under the baton of Mehta. She sang Don Giovanni (Donna Anna) to Glyndebourne, at Wiener Staatsoper and the Metropolitan, the role of Elettra in Idomeneo in Dresden under the baton of Colin Davis, Vitellia in La Clemenza Di Tito and the title role in Luisa Miller at the Royal Opera House. She returned to Opéra National de Paris in Simon Boccanegra and Otello.


Her repertoire also includes Pergolesi’s Il Flaminio, La Bohème at Wiener Staatsoper and at Metropolitan Opera, Donna Elvira in Don Giovanni, Sifare in Mitridate, Re Di Ponto in Turin and Paris with Christophe Rousset, Medora in Il Corsaro, Antonia in Les Contes D'Hoffmann, Alice in Falstaff in Rome with Daniele Gatti, in Florence with Pappano, and at Covent Garden with Haitink. She was Amelia in Simon Boccanegra, Margherite in Faust, Luisa Miller, and Elisabetta in Don Carlo, debuted at Teatro Comunale in Florence under the baton of Zubin Mehta, Liù in Turandot at Gran Teatre Liceu di Barcellona.


She has recently sung Thaïs in Turin, the Verdi Requiem conducted by Maestro Pappano at Covent Garden, Così Fan Tutte in Valencia and Vienna, Le Nozze Di Figaro in Madrid, at the Opéra National in Paris and at the Bayerische Staatsoper in Munich, Simon Boccanegra conducted by James Levine in Boston and New York, Carmen at the Metropolitan Opera in New York, Luisa Miller at the Zurich Opera, La Bohème in Tokyo Yokohama on tour with the Teatro Regio in Turin. Additionally: Simon Boccanegra at the Metropolitan Opera, Falstaff and La Bohème in Zurich and finally Don Giovanni at the Metropolitan Opera, in Washington and at Teatro alla Scala in Milan as well as Adriana Lecouvreur in Barcelona, Don Carlo in New York and at Teatro Regio in Turin, Il Tabarro in Verbier, Falstaff at Teatro Colon in Buenos Aires.


Her future engagements include Mefistofele, Pagliacci and Aida at the Metropolitan Opera, Simon Boccanegra in Barcelona, Vienna and Hamburg.