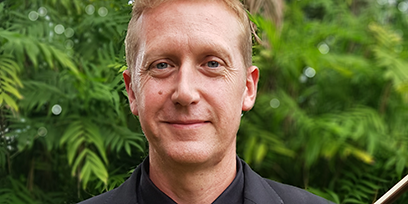 Born and raised in Sydney, Ben started studying violin with Yasuki Nakamura at the age of four, completing his studies at the Sydney Conservatorium of Music with Christopher Kimber. After a couple of years freelancing in the United Kingdom, in 2000 he successfully auditioned for a Tutti First Violin job in the Orquesta Sinfonica de Galicia in northern Spain, a position he held for the next 16 years.

Returning to Sydney in early 2017 along with his partner and two young boys, Ben freelanced with various Australian and New Zealand ensembles. He was appointed to the position of Tutti Violin in 2020.

Fun Fact: When Ben started his job in Galicia he spoke three badly pronounced words in Spanish, “Hola, Cerveza and Gracias”. He very quickly learnt the Spanish numbers and alphabet crucial to orchestral rehearsal during his first embarrassing day at work.

N.B. The Spanish letter “E” sounds exactly like the Australian letter “A”!