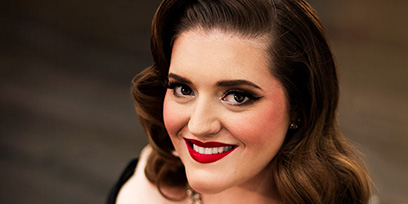 Soprano Bronwyn Douglass has been praised for her “rich, warm tone” and “quietly radiant presence” by Limelight Magazine, who also featured her as a “Rising Star” and one of the “Next Generation” of Australian opera singers in 2019.

Bronwyn made her solo debut performing the role of Anna Kennedy in Donizetti’s Maria Stuarda in Concert for Opera Australia (2022), also performing as one of the Pages in Wagner’s Lohengrin (2022). Future engagements include Donna Elvira in Opera Australia’s upcoming production of Don Giovanni (2023).

Having previously worked as a Mezzo-Soprano, roles for other companies have included: Rosina in The barber of Seville, Olga in Eugene Onegin, Flora in La traviata, Suzuki in Madama Butterfly, 2nd Witch in Dido and Aeneas and Miss Baggott in The Little Sweep.

Bronwyn is the proud winner of some of Australia’s most prestigious awards and scholarships, including The Joan Sutherland and Richard Bonynge Bel Canto Award and The Opera Foundation for young Australians Lady Fairfax New York Scholarship.

Originally from Milton on the South Coast of New South Wales, Bronwyn holds a Bachelor of Music from the Australian National University School of Music and a Masters of Music from the Queensland Conservatorium Griffith University. She is also an alumna of the Lisa Gasteen National Opera School, the Melba Opera Trust, and the Georg Solti Accademia di Bel Canto, Tuscany.