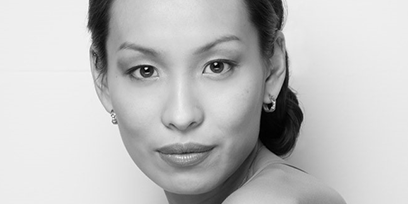 Recently returned Australian soprano, Cathy-Di Zhang, is an Associate of the Royal Academy of Music in London where she completed her studies on full scholarship from 2010-2015. She graduated with a Master of Arts (Vocal Studies) – Distinction, Dip.RAM and Advanced Diploma in Opera Performance and she furthered her training on the “Opera Works” Programme at English National Opera.

2021 started with two solo concerts for the Castlemaine State Festival, “Chanson and Weill” for their Buda Salon Series and an outdoor gala of opera favourites and Chinese art song. For Opera Australia, Cathy-Di is excited to be making her company and role debut as Micaëla in Bizet’s Carmen for the National Tour. Later on in the season, she will be making her debut for Victorian Opera in the main role of Zhu Ying Tai in Richard Mills’ new opera The Butterfly Lovers.

Prior to the pandemic, Cathy-Di sang the role of Mädchen in K.Weill’s Aufstieg und Fall der Stadt Mahagonny in a new production by Tony award-winning director Ivo van Hove for Festival d’Aix-en-Provence under Esa-Pekka Salonen and the Philharmonia Orchestra and subsequently for Dutch National Opera under Markus Stenz and the Netherlands Philharmonic. Other opera credits include Mimi (La Bohème) for Opera @ Stone in Berlin, Fiordiligi (Così fan tutte) for Kammeroper Schloss Rheinsberg, the title role of Massenet’s Cendrillon and Lauretta (Gianni Schicchi) for Royal Academy Opera in London, Nella (Gianni Schicchi) For Les Azuriales Opera in Nice and Gretel (Hansel and Gretel) and Lisa (La sonnambula) as a young artist for Pacific Opera here in Sydney.

As a soloist in concert, Cathy-Di has performed under Ayrton Desimpelaere with the Orchestra of the Opéra de Liége – Wallonie, Belgium, in the season opening concert with the Xi’an Symphony Orchestra under Dane Lam in China, with the Suzhou Symphony Orchestra also under Dane Lam at the Suzhou Grand Theatre, Shanghai Concert Hall and the NCPA in Beijing as part of the iSing! International Young Artists’ Festival, under Arie van Beek with the Orchestre de Chambre de Genève at Victoria Hall in Geneva, Switzerland and under Marius Stieghorst with the Orchestre Symphonique d’Orléans for the “Rencontres Musicales de Chaon” Festival in France.

As an avid chamber musician, Cathy-Di appeared all around Italy in trio and quartet concerts (with violin, cello and piano) including for “Chiave Classical” at Teatro Accademico in Castelfranco Veneto, for the Sonora Festival at the Stadttheatre “Teatro Puccini” in Merano, for the Sagra Musicale Malatestiana at Teatro E. Novelli in Rimini, the Teatro Umberto Giordani in Foggia and for Interludio Festival in Pesaro.

As a student, Cathy-Di was selected for the Mozart Residency at Festival d’Aix-en-Provence in France and for both the Georg Solti Accademia masterclasses in Italy, at the Fondazione Cini in Venice and the bel canto course in Castiglione della Pescaia. She then went on to the Verbier Academy in Switzerland.

She also holds a Bachelor of Commerce (Finance and Accounting) with Distinction from the University of New South Wales, Australia.