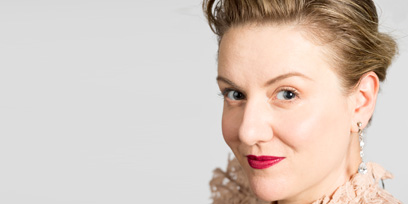 Australian soprano Celeste Lazarenko is a graduate of the Guildhall Opera Course, London, under vocal tuition of Rudolf Piernay and from the Sydney Conservatorium Opera School.  She has a Masters Degree in Performance from both colleges, and a Bachelor of Visual Arts majoring in Painting from University of Sydney. Celeste has been the recipient of many prizes and awards including the Countess of Munster Award, The Australian Music Foundation Award, The Marten Bequest and was a finalist in the prestigious Kathleen Ferrier Competition 2005 at the Wigmore Hall, London, where she was described in the Daily Telegraph (UK) as “…the most darkly intense of the lot… Electrifying.”

During the course of her studies at the Guildhall, Celeste appeared in numerous productions in roles such as the Governess from Britten’s Turn of the Screw as part of the Kiev Festival 2005 with the National Music Academy Chamber Orchestra, Barbarina in the English premiere of The Little Green Swallow by Jonathan Dove, Denis in the premiere of Violet by Roger Scruton, Susanna (Le Nozze di Figaro), Rosina (La Finta Semplice) and Nanetta (Falstaff).

While living in London, Celeste worked with Glyndebourne Chorus and Opera North where she sang the role of Ninfa as well as covering La Musica in L’Orfeo, and the lead role of Elmira in Keiser’s Croesus in 2007. She also worked extensively at English National Opera where she covered the title role in Partenope, Nora (Riders to the Sea), the soprano solo (Luonnotar), Clemence (L’Amour de Loin) and Polissena (Radamisto). For English Touring Opera she sang the role of Morgana (Alcina) and for East Sussex Opera Company, Mary in Vaughan Williams’ Hugh the Drover.

She has also played Pamina and Second Lady in The Magic Flute for Opera Australia’s touring production and performed with Pinchgut Opera as Leonore in L’amant jaloux (André Grétry).