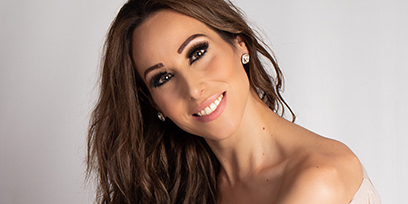 Clarissa graduated with Distinction in Voice (Bachelor of Music) from The Sydney Conservatorium of Music. She began her journey towards an operatic career when, at age 11, she became a part of the Opera Australia’s Children’s Chorus performing in several seasons of Cavalleria Rusticana/I Pagliacci, Turandot and La Bohème.

Principal roles (touring China) with Australian International Productions include The High Priestess in Aïda, and First Lady in Die Zauberflöte. Clarissa also performed the role of Micäela in Carmen with Opera New England.

Clarissa won the prestigious Opera Foundation Australia’s Lady Fairfax New York Award to study with teachers and coaches from The Metropolitan Opera and The Juilliard in New York, and The Australian Singing Competition’s Royal Overseas League Bursary Award which allowed her to travel to London to study, while attending rehearsals at The Royal Opera House.  She also won the Dame Joan Sutherland Encouragement Award, was recognised as an Outstanding Artist in the McDonald’s Performing Arts Challenge, and won the Pollard People’s Choice Award for Performance Excellence.

Clarissa, being a versatile Soprano, has appeared in many concerts and tours, spanning genres from Opera and Classical music, to Music Theatre and Jazz.

In concert, Clarissa will be performing at The Sydney State Theatre and the Melbourne Palais Theatre in May for The San Remo Scaletta Shows, and later in the year she will be appearing as Guest Soprano for The Australian Tenors Tours touring around Australia, presented by Australian Global Entertainment. Recent performances include two concerts for Opera in the Arboretum , performing alongside Rosario La Spina, Jane Ede and Jose Carbo at Pearl Beach, and previously performing with with Teddy Tahu Rhodes, James Egglestone and Angela Brewer, Conducted by Patrick Brennan.

Clarissa’s other concert appearances include performing as the Soprano soloist with Willoughby Symphony Orchestra in their Mozart Requiem, conducted by Paul Fitzsimon. She has regularly performed in “An Afternoon at the Proms Spectacular” as a principal soprano featuring Orchestra, Dancers and Pipers, and has appeared as guest artist soprano for Mark Vincent’s regional NSW tours “Love Will Lead The Way”, “Young at Heart” and “Christmas with Mark Vincent.” and recently performed the famous “Opera/Rock” duet Barcelona with Virginia Lillye at the Sydney State Theatre in “Queen’s Greatest Hits,”conducted by George Ellis.

Clarissa has toured China as Principal Soprano in the “Highlights of Music Theatre” concert tour performing excerpts from Phantom of the Opera, The Sound of Music, The King and I and West Side Story with Australian International Productions, conducted by Trevor Jones.

Clarissa tours both nationally and internationally with The 7 Sopranos, (created by Tarita Botsman/Produced by Cre8ion), she has toured with operatic group ENCORE throughout Japan, and regularly appears as guest artist with SMA Production’s performances of Opera by Disguise, Wish upon a Star, and Entertainment by Design. Clarissa was chosen to be featured as the guest soprano in Princess Cruises classical crossover production show BRAVO! She launched 7 casts over her guest artist contracts performing well loved soprano arias to audiences all over the world.

Clarissa also co-formed operatic group FUSION, and Le Stelle which is in demand on the cruise circuit both here and abroad.

Recently, Clarissa made the Quarter Finals of The Voice Australia, Season 9, performing a mix of well loved arias, opera/rock pieces, and even a twist on a famous excerpt from a choral work. She was mentored by Delta Goodrem and Boy George and made the final 5 artists in Delta’s team. Clarissa was invited as a judge to represent opera singers on Channel 7’s TV show “All Together Now,” compered by Julia Zemiro.

Recordings include: Le Stelle, with Baritone Javier Vilarino, accompanied live on piano with Glenn Amer, The 7 Sopranos album Popcorn – Songs of Stage and Screen, as well as their first album that was self-titled  that was released by the ABC, and ENCORE’S Il Destino available on itunes.