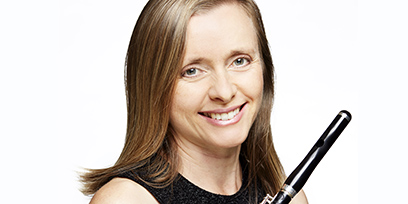 Born in Sydney, Diane gained her Bachelor of Music Degree (with Merit) from the Sydney Conservatorium of Music studying with Rosamund Plummer.  Further flute studies, made possible with scholarships from the Queen Elizabeth II Silver Jubilee Trust for Young Australians, the Sydney Conservatorium of Music and the Music Students Overseas Study Foundation (NSW), led to participation in summer schools and masterclasses in France with Jean-Pierre Rampal and Alain Marion followed by Graduate study at Indiana University in the US with Peter Lloyd and Kate Lukas. In 1993, Diane graduated with a Performer Diploma (with Distinction).

Diane is also a member of the wind quintet Quinterlude and the Tucana Flute Quartet, comprised of members from the Opera Australia Orchestra.

Fun fact: One of Diane’s special memories is playing Der Rosenkavalier under conductor Stuart Challender AO. A career highlight for Diane was playing Handel’s Rinaldo with the piccolo, playing from the upper loge area as a “bird”.