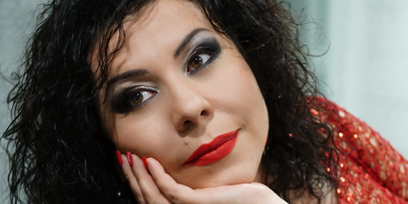 
Her international career launched in 2012 when she made her debut at the Arena di Verona as Amneris in Verdi's Aida, with Daniel Oren conducting.


This successful debut brought forth engagements at the Centenary Festival of the Verona Arena in 2013, as well as the Bicentennial of Verdi: Azucena in Verdi's The Troubadour (Carella – Zeffirelli) and Amneris in the new production of the La Fura dels Baus conducted by Meir Wellbert, as well as in Aida, directed by De Bosio and conducted by Marco Armiliato.


In 2014 Elena Gabouri, for the third consecutive season, returned to the Arena di Verona for the role debut of Ulrica in Verdi's Masked Ball (Battistoni-Pizzi) and as a cover for Bizet's Carmen (Kovachev – Zeffirelli)


In 2015 she made her Asian debut in the Seoul Arts Center (South Korea) as Amneris in Aida (Bisanti – De Carlo). She returned in 2016 for Ulrica in Verdi's A Masked Ball (Goldstein-Bellotto).


Elena also sang the role of Zia Principessa in Puccini's Sister Angelica at the Wexford Festival (Ireland); Madame de la Haltière in Massenet's Cinderella at Massy Opera (France); Fenena of Verdi's Nabucco with the Ramfis Production (France); Miss Baggott of Britten's Let's Make an Opera in the Besançon Opera (France); Concepcion in Ravel's L'heure espagnole and the title role of Bizet's Carmen in the Rimski-Korsakov theatre of Saint-Petersburg.