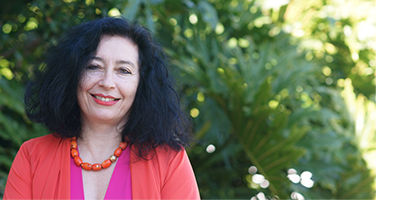 Elena Kats-Chernin is one of the most cosmopolitan composers working today, having reached millions of listeners worldwide through her prolific catalogue of works for theatre, ballet, orchestra, and chamber ensemble. Her dramatically vivid music communicates a mixture of light-heartedness and heavy melancholy, combining strong rhythmic figures with elements of cabaret, tango, ragtime, and klezmer.

Born in 1957 in Tashkent (Uzbekistan), Kats-Chernin received training at the Gnessin Musical College before immigrating to Australia in 1975. She graduated from the New South Wales Conservatory in 1980 and was awarded a DAAD (German academic exchange) grant to study with Helmut Lachenmann in Hanover. She remained in Germany for 13 years, returning in 1994 to Australia where she now lives in Sydney.

One of Australia’s leading composers, Elena Kats-Chernin has created works in nearly every genre. Among her many commissions are pieces for Ensemble Modern, the Bang on a Can All-Stars, the Australian Chamber Orchestra, the Adelaide, Tasmanian and Sydney Symphony Orchestras, Present Music, City of London Sinfonia, Swedish Chamber Orchestra and the North Carolina Symphony.

Her brilliantly scored, energetic, and often propulsive music has been choreographed by dance-makers around the world. In 2000 she collaborated with leading Australian choreographer Meryl Tankard in a series of large-scale dance works. The first of these, Deep Sea Dreaming, was broadcast to an audience of millions worldwide as part of the opening ceremonies of the Sydney 2000 Olympic Games.

Works from the following years include the concerto for basset clarinet and chamber orchestra Ornamental Air which has been toured internationally and also released on CD for Chandos by Michael Collins, and her fourth opera The Rage of Life, staged in Belgium, Holland, Hungary, Germany and Switzerland. For the Australian Brandenburg Orchestra and choir, she composed Prelude and Cube.

Among her most recent premieres was The Witching Hour, a highly acclaimed concerto for eight double basses for the Australian World Orchestra, performed at the Sydney Opera House in September and at the Esplanade Concert Hall in Singapore in October 2016. Her Singing Trees for the Australian Chamber Orchestra was premiered in December 2016 at the Melbourne Recital Centre.

In 2019, she was composer-in-residence in collaboration with Opera Australia. The company performed her work in the brand new opera, Whiteley.