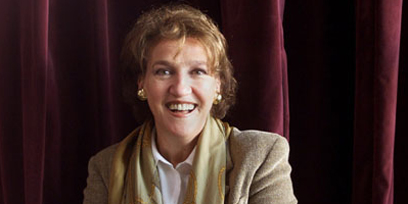 Elizabeth Whitehouse, one of Australia’s most renowned sopranos, lives in Germany with her career focused primarily in Europe.


She recently appeared in the José Carreras Charity Gala at the Megaron in Athens and in April sang the last of sixteen performances of the title role in Turandot in Münster. Forthcoming engagements in the 2009 -2010 season include Kundry in Parsifal in Münster and Turandot in Lübeck.  In 2011 she returns to Opera Australia to make her debut in the role of Lady Macbeth in Verdi’s Macbeth.


Other notable operatic engagements include Marie (Wozzeck) for the Teatro Comunale in Bologna, Agathe (Der Freischütz) for the Israeli Opera in Tel Aviv, Ellen Orford (Peter Grimes) in Genoa, Gutrune (Götterdämmerung), Leonore (Fidelio) with Riccardo Muti and Ellen Orford with Jeffrey Tate at La Scala, a concert performance of Act Two of Fedora with Plácido Domingo in San Francisco, Tosca in San Francisco and Colorado, Amelia (Un Ballo in Maschera) and Senta (Der Fliegende Holländer) at the Deutsche Oper, Elsa (Lohengrin) and Capriccio in Turin as well as Feldmarschallin (Der Rosenkavalier) in Palermo and at La Scala.


She has also sung Fidelio for Maggio Musicale in Florence; Tosca in Frankfurt and for New National Theatre, Tokyo; the title role in Ariadne auf Naxos under the direction of Marcello Viotti for La Fenice, Venice; a Strauss concert with the Bavarian Radio Orchestra, Munich; Gutrune in a concert performance of Götterdämmerung at the Teneriffa /Canary Islands Festival, Strauss Vier letzte Lieder in Ljubljana, Slovenia, Gutrune and Third Norn in Götterdämmerung in Madrid and Rezia.


She made her Australian debut with Opera Australia in 1996 as Senta (Der Fliegende Holländer), for which she won the MO Award for Operatic Performer of the Year, and since then has returned to Australia regularly.  In 2005 she sang the role of Fata Morgana in The Love For Three Oranges conducted by Richard Hickox which was recorded by Chandos and in 2006 she sang Kostelnicka in Jenufa for the first time, receiving outstanding reviews. In 2007 she sang the Foreign Princess (Rusalka) for Opera Australia in both Sydney and Melbourne. Other roles for OA include Lady Macbeth of Mtsensk conducted by Richard Hickox, the title role in Manon Lescaut, Fidelio, Marie (Wozzeck), Maddalena (Andrea Chénier) and Feldmarschallin (Der Rosenkavalier) both conducted by Simone Young, as well as Tosca for the Olympic Arts Festival.


Elizabeth won a Helpmann Award and a MO Award for Lady Macbeth of Mtsensk and Green Room Awards for Fidelio, Manon Lescaut and Der Rosenkavalier.


Elizabeth is a skilled concert artist whose many performances include Gurrelieder in Spain, Wesendonck Lieder in Brazil, Gurrelieder with the Berlin Philharmonic under the baton of Sir Simon Rattle, Fidelio in concert, conducted by Zubin Mehta in Israel, Senta in Der Fliegende Holländer in concert with the Orchestre National de France and Zemlinsky’s Lyrische Symphonie with the Sao Paulo Symphony Orchestra under Maestro John Neschling,  Mahler Symphony no. 2, Verdi Requiem and Mahler Symphony no. 8 for Melbourne Symphony Orchestra and Beethoven Symphony no. 9 with the Sydney Symphony. More recently she has sung excerpts from Lady Macbeth of Mtsensk in Basel, Gala concerts celebrating the one thousandth year anniversary of her hometown Fürth in Germany, a lieder recital in Paris to raise funds for CARE France, a series of four concerts in Brazil and opera arias with Nürnberg Symphony.


In November 2006, she recorded her first solo CD with Richard Bonynge on the Melba Recordings label, which has been received internationally to great critical acclaim.