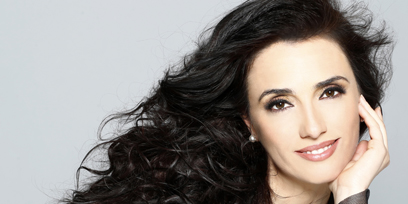 Jaho’s engagements for the 2016/17 season include Desdemona in Otello at Teatro Real in Madrid, Antonia in Les contes d’Hoffmann at Opera National de Paris, Violetta in La Traviata at Opera Australia, and Cio-Cio-San in Madama Butterfly at Covent Garden, Washington National Opera and Teatro Real.

In the 2015/16 season, Jaho sang the title role in Manon Lescaut at Bayerische Staatsoper, Cio-Cio-San in Madama Butterfly at Staatsoper Berlin, Opera Bastille and Theatre antique d’Orange in France, Desdemona in Otello at Grande Teatre del Liceu and Teatro Real, the title role in Suor Angelica at Covent Garden, Liu in Turandot at Staatsoper Stuttgart, and high-profile concerts at the Barbican center in London and Theatre des Champs-Elysees in Paris. 2016 also saw the critically acclaimed release of a new recording of Leoncavallo’s opera Zaza with Ms. Jaho in the title role and Maurizio Benini leading the BBC Symphony.

In the 2014/15 season, Jaho sang Violetta in La Traviata at Opera Bastille, Vienna State Opera, Teatro Real and Bayeriche Staatsoper, the title role in Anna Bolena at the Bolshoi Theatre in Moscow and Opera de Toulon in France, Blanche de la Force in Les Dialogues des Carmelites at Teatro Petruzzelli in Bari, the title role in Thais at Theatro Municipal in Sao Paulo, and Cio-Cio-San in Madama Butterfly at Paris Opera. Engagements for the 2013/2014 season included the title role in Manon Lescaut and Mimi in La Boheme at Covent Garden, Mathilde in Guillaume Tell at La Monnaie in Brussels, Cio-Cio-San in Madama Butterfly at Staatsoper Hamburg, and Amelia in Simon Boccanegra at Opera National de Lyon in France.

Ermonela Jaho began the 2012/2013 season performing as Violetta in La Traviata at the Bilbao Opera. She subsequently appeared as Blanche de la Force in Les Dialogues des Carmelites at Opera de Toulon, Cio-Cio-San in Madama Butterfly at the Gran Teatre del Liceu in Barcelona, Violetta in La Traviata at Bayerische Staatsoper and the Vienna State Opera, and Magda in La Rondine at Covent Garden. In the fall of 2013, Jaho sang as Giulia in a revival of Gasparo Spontini’s rarely heard La Vestale at the Theatre des Champs Elysees, marking work’s first performance in the French capital in over 150 years.

In the 2011/12 season, Jaho sang Violetta in La Traviata at the Vienna State Opera and for her debut in Bilbao. She opened the season at the Arena di Verona as Violetta in a new production of La Traviata, conducted by Carlo Rizzi and staged by Hugo De Anna. Jaho also returned to Covent Garden to sing the title role in in a new production of Puccini’s Suor Angelica, conducted by Antonio Pappano and staged by Richard Jones. She made her debut at Teatro alla Scala in the title role of Massenet’s Manon and made her debut at the Royal Swedish Opera in Stockholm as Violetta, later debuting at the Vienna State Opera and Deutsche Oper Berlin in the same role.

After Ms. Jaho’s Albanian debut in La Traviata, she moved to Italy to pursue her musical studies at the Academia di Santa Cecilia in Rome. A recipient of numerous awards from several prestigious Italian vocal competitions, such as the Giacomo Puccini Competition in Milan, Spontini International Singin Competition in Ancona and Zandonai Competition in Rovereto, Jaho began her professional career in Italy and was soon heard in many leading theatres. She debuted at the Teatro Comunale di Bologna as Mimi in La Boheme under Daniele Gatti, at the Teatro La Fenice in Venice as Susanna in Le Nozze di Figaro and at the Teatro Giuseppe Verdi in Trieste as Micaela in Carmen. Jaho made her first appearances outside of Italy at Ireland’s Wexford Festival in productions of Massenet’s Sapho and Tchaikovsky’s The Echantress, and she debuted in Germany as Norina in Don Pasquale at the Bayerische Staatsoper. She also appeared as Susanna in Le Nozze di Figaro at both the Theatre du Capitole in Toulouse and at the Grand Theatre de Geneve. Jaho made her South American debut in the title role of Semiramide opposite Daniela Barcellona and Juan Diego Florez in Lima, Peru. She subsequently appeared at the Teatro Comunale in Bologna in several roles, including Adina in L’Elisir D’Amore under Corrado Rovaris, Rusalka in Rimsky-Korsakov’s May Night under Vladimir Jurowski, and the Principessa in the 2005 new production of Ottorino Respighi’s rarely performed Le Bella Dormente under Aldo Sisillo. Jaho starred in La Fenice’s production of Sadko, made her debut at the Teatro de la Maestranza in Seville in L’Incoronazione di Poppea under Christoph Rousset and was also heard in the Academia di Santa Cecilia’s concerts of Prokofiev’s Maddalena under Valery Gergiev.

Other roles in Jaho’s developing repertoire include Imogene in Il Pirata, the title role in Adriana Lecouvreur, and the title role in Mascagni’s Iris. Her interpretations have been transmitted directly via many renowned radio and television stations, such as BBC 3 England, Mezzo Europe, ZDF Germany, Euronews, Sky Classic, RAI, and many more.