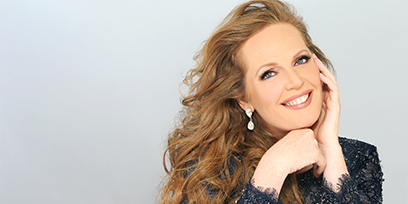 Eva Maria Westbroek is one of the most acclaimed and widely-recognized classical singers in the world today. She has appeared at the great opera houses and festivals of the world, such as the Royal Opera House – Covent Garden, Opera National de Paris, Metropolitan Opera, Wiener Staatsoper, Deutsche Oper Berlin, Teatro alla Scala in Milan, Semperoper Dresden and Bavarian State Opera in Munich, as well as at the Bayreuth Festival, Salzburg Festival, and the Aix en Provence Festival. Westbroek commands a very wide repertoire of many different periods and styles, including such roles as Sieglinde in Die Walküre, Katerina in Lady Macbeth of Mtsensk, Minnie in La Fanciulla del West, Maddalena in Andrea Chénier and the title roles in Francesca da Rimini, Jenufa, Manon Lescaut, and Katya Kabanova. She also starred in the sensationally received world premiere of Wayne Turnage’s opera Anne Nicole at Covent Garden. Westbroek’s most recent role debuts have been Marie in Wozzeck at the Dutch National Opera in Amsterdam and Isolde in Tristan und Isolde, first at the Semperoper Dresden and then in Baden-Baden.

Eva Maria Westbroek began the 2017/2018 season as Leonora in the Dutch National Opera’s new production of La Forza del Destino, directed by Christoph Loy and conducted by Michele Mariotti. She then returned to the Bavarian State Opera as Giorgetta in a new production of Il Tabarro from Puccini’s Il Trittico, conducted by Kyril Petrenko. Westbroek also appeared as Santuzza in Cavalleria Rusticana at the Theatre Royale de la Monnaie in Brussels and as Katerina in Lady Macbeth of Mtsensk District at Covent Garden. Invited as an Artist in Residence by the Concertgebeouw Orchestra, she sings three separate programs and participates in chamber concerts with the orchestra during the course of the season. In the summer of 2018, the artist will debut with the Western Australian Symphony in a concert performance of Tristan und Isolde, after which she will appear with the Melbourne Symphony Orchestra as Sieglinde in a concert performance of Act 1 of Die Walküre.

Eva Maria Westbroek studied at the Royal Conservatory of the Hague and then pursued her vocal studies with the legendary soprano Iris Adami Corradetti and famed American tenor James McCray. She made her professional debut in the title role of Tosca at Teatro Manzoni at the age of 25. Among the most important experiences of the first years of her career were her performances as Elisabeth in Don Carlos and Chrysothemis in Elektra at the Komische Oper in Berlin. She subsequently became a member of the Stuttgart Opera, where she developed a very varied repertoire of roles, including Donna Anna in Don Giovanni, Adalgisa in Norma, Desdemona in Otello, the title role in Jenufa, Emilia Marty in The Makrapoulos Case, and Marie in The Bartered Bride, as well as Tosca. Westbroek also starred as Carlotta in the internationally acclaimed production of Franz Schrecker’s Die Gezeichneten, and she has been honored by the Stuttgart Opera with the title of Kammersaengerin.

A laureate at the Angelica Catalani Concours and the Santa Maria Ligure Concours, Eva Maria Westrboek’s honors and awards include the Dutch VSCD Classical Music first prize for ‘Most Impressive Individual Artistic Achievement’. Since the spring of 2014, Westbroek has felt especially honored and privileged to be an ambassador for Musicians without Borders.