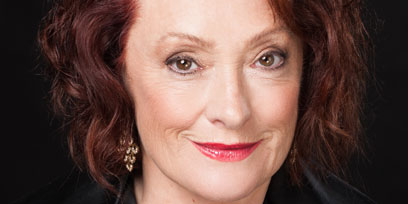 Geraldine Turner’s name is synonymous with Australian show business. Her last stage appearance was the lead in Tom Davis’s new play, The Chain Bridge as well as touring Australia with her one-woman show, Turner’s Turn. Her most recent outing on the musical stage was her award winning performance in Ruthless, and on television, in the cast of House Husbands. Other recent stage performances were in a tour of Side by Side by Sondheim, in Alana Valentine’s play MP and in White Rabbit, Red Rabbit in Canberra.

Musicals include Wicked, Sweeney Todd, A Little Night Music, Into The Woods, Company, Chicago, Anything Goes, Cabaret, Kismet, Oliver, Guys and Dolls, Call Me Madam, Noel and Gertie, Mack and Mabel, Ned Kelly, Grease, The Witches of Eastwick, Jacques Brel is Alive and Well and Living in Paris and and operettas La Belle Helene, HMS Pinafore and The Mikado.

Films include Careful He Might Hear You, The Wog Boy, Summerfield and Break of Day.

Geraldine has appeared in many television series, movies, and shows whilst her cabaret and concert career has taken her around the globe. She was the first person to record an all Sondheim album, The Stephen Sondheim Songbook, which was followed by a Volume 2, due to its popularity worldwide. Other albums include When We Met, Torch Songs, Once In A Blue Moon and her cast albums of Chicago and Anything Goes.

Geraldine continues to direct and write for the theatre. She has received various Green Room Awards, Mo awards and an Order of Australia for services to the arts.