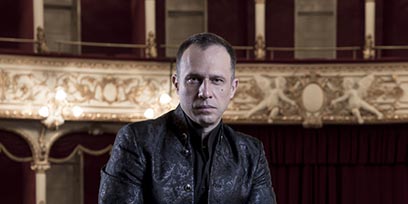 Born in Milan, Giampaolo Maria Bisanti studied conducting, clarinet, piano and composition at the Conservatory ‘G.Verdi’. He was awarded several prizes in international conducting competitions such as the ‘Dimitris Mitropolous’ competition in Athens (chairman Sir Neville Marriner), the ‘Franco Capuano’ Competition in Italy, as well as the ‘Ferencsik Janos’ Competition in Budapest.  He has studied with Juri Ahronovitch and Donato Renzetti at the ‘Accademia Chigiana’ in Siena and has held several masterclasses in Milan and Boston.

Since the early stages of his career, Bisanti has consistently been invited to conduct at major opera houses and theatres across Italy (among his first great successes was Orphee Et Euridice, the opening-season production of the Teatro Comunale Bologna in 2018, featuring Roberto Alagna, a production which has been released on DVD). At the same time, he accumulated great success abroad and performed in countries such as Seoul, Vilnius, Tel Aviv, Strasbourg and at the Royal Opera House in Stockholm where he made his debut performance in 2013’s Puccini’s Tosca.

Remarkable highlights and successes include La Traviata in Florence, Palermo and Catania, Tosca in a coproduction of the circuit of theatres in Lombardy/Italy, Macbeth in Triest, Turandot at the Performing Art Center in Seoul, Otello at the Teatro Lirico in Cagliari, L’elisir D’amore at the Teatro Regio in Turin. During 2013/2014 he conducted Otello again which was a co-production of the theatres in Lombardy, Stiffelio in Stockholm, Turandot in Turin as well as in Cagliari, La Boheme at the Teatro Carlo Felice in Genoa, and Madame Butterfly at the Teatro La Fenice in Venice.  In 2014/2015 he returned to almost all major theatres mentioned above and conducted Madame Butterfly in a coproduction of the theatres in Lombardy, Cavalleria Rusticana and Madame Butterfly in Florence, Nabucco in Triest, Lucia Di Lammermoor in Genoa, Il Barbiere Di Siviglia in Turin, Aida in Seoul, La Traviata in Stockholm.

In season 2016/2017 additional international debuts took place: At the Teatro Liceo in Barcelona with a new production of Verdi’s Macbeth,  at the New National Theatre in Tokyo leading a new production of Lucia Di Lammermoor, he returned to the Oper Zurich for a revival of La Boheme, at the Semperoper Dresden for La Boheme as well as Carmen, at the Teatro Sao Carlos for Anna Bolena,  at the Deutsche Oper Berlin, this time for a revival of Aida, at the Teatro Petruzzelli in Bari for Aida, and at the Teatro Lirico in Cagliari for Madame Butterfly.

In season 2017/2018 he was highly acclaimed leading a new production of Lucia Di Lammermoor at the Semperoper Dresden, further debuts occurred at the Opéra Royal de Liège (Rigoletto) and Opéra Lausanne (La Sonnambula) as well as at the Staatsoper Vienna (Macbeth) and the Festival des Chorégies in Orange/France, conducting Il Barbiere Di Siviglia. Furthermore, he returned to Dresden for La Boheme, to the Opera Zurich for a revival of Turandot, to the Sao Carlos in Lisbon for I Capuleti E I Montecchi, and lead different symphonic concerts and a concert at the Philharmonie Paris and the Chamber Orchestra of Paris with vocal soloists Olga Peretyatko & Benjamin Bernheim.

In 2018/2019 Bisanti returns to the Liceo Barcelona for a new production of Madame Butterfly and makes his debut at the Bayerische Staatsoper Munich with La Boheme and at the opera Tenerife in Turandot. He will return to the Deutsche Oper Berlin for Andrea Chenier, the Staatsoper Vienna for Rigoletto, the Liège for a new production of Anna Bolena and at the Semperoper Dresden for La Traviata.

Most recently he has been appointed General Music Director of the Teatro Petruzzelli in Bari for seasons 2017-2018-2019, leading each season with two operatic productions and a great number of symphonic concerts.