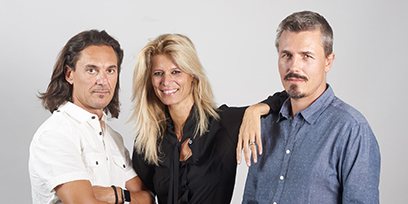 In 1998, Christiana Picco, Florian Boje and Claudio Santucci opened the award winning studio, Giò Forma. Multidisciplinary in nature, Giò Forma’s 20 person team is made up of designers, artists and architects of whom operate internationally. The type of events produced by the studio are diverse, having organised huge scale international events to meaningful exhibitions, architecture and set designs for international stars such as Andrea Bocelli and Lorenz Jovanotti.

Italy’s presence was felt in the Italian Pavilion at Expo 2015 with the acrchitectial landmark “THE TREE OF LIFE”. Giò Forma also designed “LEOSPHERE”, the dynamic museum and theatrical monument that celebrates the link between Milan and Chicago. Other examples of where their expertise can be seen include, The Woman in Expo Pavilion, Regional Pavilions, Red Cross and the minstry of agricultural lounges.

The next 3 years will see Giò Forma deliver cutting edge designs to Opera houses in LA, Beijing, Astana, Australia and many other locations globally. In addition, Giò Forma has concieved the Exhibit “Broken Nature: Design Takes on Human Survival”, for the XII International Exhibition in Milan Triennale.

Giò Forma was internationally awarded for the Cartier Pavilion’s “Legendary Thrill” for design week 2018 in Milan and Lumen, Museum of Mountain Photography in Brunico (Italy) as well as for the Maraya Concert Hall, a temporary building in Al-Ula for the “Winter at Tantora” festival in Saudi Arabia already defined as “The Wonder of Maraya”.