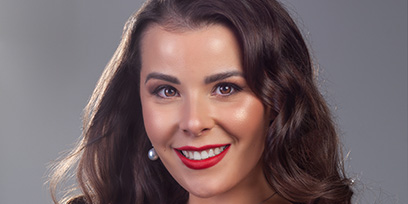 Australian-Italian soprano Giuseppina Grech is one of the country’s most exciting and versatile vocal artists. With a repertoire spanning opera, crossover and music theatre, Giuseppina’s voice and stage presence have thrilled audiences at home and internationally. Giuseppina graduated from the Melbourne Conservatorium with a Bachelor of Music, before being awarded a scholarship in 2014 to continue her vocal studies at La Scala’s prestigious Teatro Accademia alla Scala in Milan. At 23, Giuseppina made her European debut as Susanna in Le Nozze di Figaro at Teatro Moriconi.

Since returning to Australia, she has performed regularly with Opera Australia in both mainstage and touring productions, including Frasquita in Carmen for the 2021 national tour, and the roles of Isabella and Ferdinand in El Kid. She has also appeared in Handa Opera on Sydney Harbour productions of La Bohème and La Traviata and performs regularly at the Sydney Opera House as a member of the extra chorus. Some of her other notable roles include Dido in Dido and Aeneas, Valencienne in The Merry Widow, Josephine in H.M.S. Pinafore, Swallow in The Happy Prince, and Lady Thiang in The King and I, earning her a Music Theatre Guild nomination. Giuseppina regularly tours as a guest soprano with some of Australia’s most celebrated artists. In 2020, she released her debut album Love is My Reason. Giuseppina is thrilled to be making her role debut as Carlotta Giudicelli in The Phantom of the Opera.