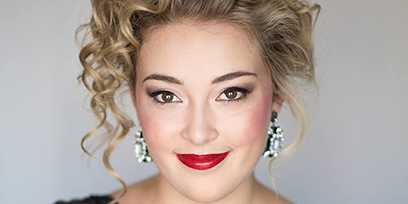 Multi award-winning soprano Imogen-Faith Malfitano completed her Bachelor of Music (performance) and Masters in Music Studies (Opera Performance) at the Sydney Conservatorium of Music. She was awarded multiple scholarships, including the prestigious ESTIVO program in Italy and an Internship with Opera Australia as well as Young Artist with Pacific Opera.

Her opera roles include: Adina, L’elisir d’amore, the title role in Floyd’s Susannah; Titania in Purcell’s The Fairy Queen; Rosina in Rossini’s The Barber of Seville; Agatha the Cat, Queen of Hearts, Mary Contrary and The Spider in By the Light of the Moon for Opera Australia’s Schools Tour, amongst others.

For Opera Australia, Imogen is currently performing the role of Angelina in their NSW schools tour, Cinderella, and will be making her debut as Mimì in La Bohème with Penrith Symphony Orchestra. After performing in the spectacular new production of The Phantom of the Opera on Sydney Harbour as part of the Operatic female ensemble, Imogen is thrilled to be returning to the Phantom stage.