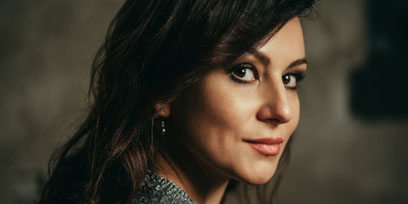 With a voice described by the New York Times as “a shimmering soprano of attractive size” with “brightness … bloom and warmth”, Irina Lungu is taking her place among today’s leading opera artists.


Among the Russian soprano's engagements in 2017/2018 are Corinna in Il viaggio a Reims at the Gran Teatre del Liceu of Barcelona, Donna Anna in Don Giovanni at the Vienna State Opera and the Estates Theatre Prague conducted by Plácido Domingo, Violetta in La traviata at the New National Theatre Tokyo, the Bolshoi Theatre Moscow and the Vienna State Opera, her first outing as Manon in Massenet’s Manon at the ABAO Bilbao, her Australian debut as Gilda in Rigoletto at the Sydney Opera House and the title role of Anna Bolena at the Teatro Filarmonico in Verona. Performances in 2018/2019 include Marguerite in Faust at the Teatro Real Madrid and the Royal Opera House Covent Garden, Norina in Don Pasquale at the Vienna State Opera, La traviata at the Hamburg State Opera, Lucia di Lammermoor in Tenerife and a concert alongside Plácido Domingo at the Paris Philharmonic.


In the last few years Ms Lungu performed Gilda and Musetta in La bohème at the Metropolitan Opera New York, La traviata at the Paris Opera, the Wiener Staatsoper, the Teatro Real Madrid, the Zurich Opera House, the Deutsche Oper Berlin and the Hamburg State Opera, Liù in Turandot at the Bavarian State Opera Munich, Musetta at the Royal Opera House Covent Garden, Donna Anna at the Vienna State Opera, Gilda at the Paris Opera and at the Rome Opera House, Nannetta in Falstaff at La Scala, a Gala Concert at the Bolshoi Theatre, Marguerite in Amsterdam and Turin, Gilda and Lucia at the Teatro Comunale Bologna, Mimì in La bohème at the Teatro Regio Turin and the Teatro San Carlo Naples, Lucia di Lammermoor, Giulietta in I Capuleti e i Montecchi, Donna Anna, Micaela in Carmen and Roméo et Juliette in Verona as well as her first Elvira in I puritani in Modena, Piacenza and Reggio Emilia.


Irina Lungu completed her degree in singing at the State Conservatory of Voronezh under the guidance of baritone Mikhail Podkopaev. After winning several important international competitions, still being student at La Scala's Accademia she was chosen by Maestro Riccardo Muti for the 2003/2004 season opening production of La Scala as Anaï in Rossini’s Moïse et Pharaon.


Since then she has portrayed numerous roles on this prestigious stage: Adina in L’elisir d’amore and the title role of Maria Stuarda, Marguerite in Faust, Nannetta in Falstaff, Oksana in Čerevički and the title role of Sancta Susanna. It was at La Scala that in 2007 she debuted the role of Violetta in La traviata under the musical direction of Lorin Maazel in Liliana Cavani’s production, returning to sing the role in the same staging in 2008 and in 2013 in Dmitri Tcherniakov’s new production conducted by Daniele Gatti.