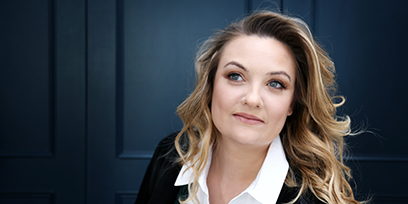 From Cahir in Ireland, Jennifer is an alumna of the Jette Parker Young Artist Programme, and has appeared at Covent Garden as Adina, L’elisir d’amore; Erste Dame, Die Zauberflöte; Ifigenia, Oreste; Arbate, Mitridate, re di Ponto; and Ines in Il trovatore, among others.

Following her sensational role debut as Elsa von Brabant in a new production of Lohengrin conducted by Andris Nelsons at the Royal Opera House in June 2018, Jennifer has been propelled to international attention, winning praise for her gleaming, silvery tone, and dramatic characterisation of remarkable immediacy.

Future engagements include reinvitations to the Royal Opera House and San Francisco Opera as well as a series of exciting house and role debuts across Europe and America, including at the Gran Teatre del Liceu, and the Deutsche Oper Berlin. On the concert platform, Jennifer will appear with the Netherlands Radio Philharmonic, and the Accademia Santa Cecilia with Sir Antonio Pappano.