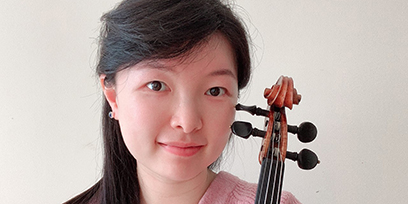 Originally from Xiamen (China), Jing Lin began playing the violin at the age of five.

Jing received her Bachelor of Music Performance from the Shanghai Conservatory of Music in 2010.

During her studies in Shanghai, she was a member of the Sino-German orchestra, led by Maestro Muhai Tang and toured extensively throughout Europe. She was also invited to play with the Shanghai Symphony Orchestra and Shanghai Philharmonic Orchestra as a guest musician. After graduating with her Bachelor degree, Jing successfully auditioned for a Tutti violin position in the Shanghai Opera House Orchestra.

In 2015, Jing moved to Sydney to commence her Master’s degree on scholarship at the Sydney Conservatorium of Music, studying under Associate Professor Ole Bohn. Jing has a passion for opera and ballet music and has loved playing with the Opera Australia Orchestra as a Casual Tutti Violinist since 2019.