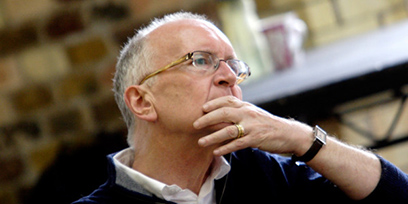 John Doyle is a Scottish stage director of musicals, plays and operas. Trained at the University of Georgia in the United States, Doyle was the associate director of the Watermill Theatre in Berkshire, England until 2008. From his work there he has become known for his unusual approach to musical theatre, often featuring casts who are both actors and musicians, accompanying one another on musical instruments while simultaneously playing roles. He has served as the Artistic Director for four prestigious theatres in the UK, where he has staged more than 200 professional productions during his career spanning over 40 years.


His last production at the Watermill Theatre was Merrily We Roll Along in March 2008. From April through July 2008 he directed the musical A Catered Affair at the Walter Kerr Theatre, followed by Road Show Off-Broadway during October through December 2008 at the Public Theater, and then a production of Oklahoma! at the Chichester Festival Theatre from June through August 2009. In 2010, Doyle directed a production of Kiss Me at the Stratford Shakespeare Festival and then ventured into the world of opera, directing Lucia di Lammermoor for Houston Grand Opera in their 2010-11 season. Doyle has also directed at the Metropolitan Opera, La Fenice in Venice, Williamstown theatre Festival, Second Stage Theatre, Princeton’s McCarter Theatre, and Cincinnati Playhouse in the Park.