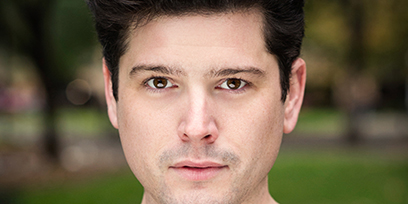 In 2021/2022, John Longmuir sings Count Almaviva in The Barber of Seville for State Opera of South Australia and Opera Australia and Oronte (Alcina) for National Opera. In 2023, he returns to OA as Almaviva and will star in SOSA’s inaugural Gilbert & Sullivan festival.

One of Australia’s most acclaimed young tenors, John was born in Edinburgh, Scotland.  His operatic studies took place at the Australian Opera Studio.

John has sung all the major leggiero repertoire for Opera Australia including: Tamino in The Magic Flute, Narcisco in Il Turco in Italia, Don Ottavio in Don Giovanni, Ernesto in Don Pasquale, Camille in The Merry Widow, Almaviva in The Barber of Seville, Nemorino in L’elisir d’amore, Fenton in Falstaff, Beppe in Pagliacci, Gastone in La traviata, The Count of Lerma in Don Carlos, Pong in Turandot and many others.  John has also appeared with West Australian Opera as Almaviva in The Barber of Seville and Camille in The Merry Widow.

Also in high demand on the concert platform, his performance highlights include: Carmina Burana with The Melbourne Symphony Orchestra and the New National Theatre in Tokyo, Elijah with Sydney Philharmonia Choirs, Bach’s Mass in B minor with the Queensland Symphony Orchestra, Handel’s Messiah with Royal Melbourne Philharmonic, Rossini’s Stabat Mater with West Australian Symphony Orchestra, Handel’s Israel in Egypt with the Berliner Cappella and Faure’s La naissance de Vénus at the Konzerthaus Berlin.   In 2012 and 2014, John was invited to sing Grimoaldo in concert performances of Handel’s Rodelinda under Richard Bonynge, now available as a commercial recording.