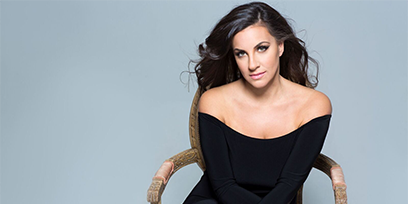 “…the infinite length of the breath, the science of chiaroscuro, the projection of the treble, the quality of the pianissimi, the variety of accents, in turn authoritarian and vulnerable, including in extraordinarily lively recitatives, as we had not heard them since Maria Callas.” – OPÉRA Magazine, translated from French (Bellini’s Il pirata, Opéra National de Bordeaux)

She reprised the role to close out her 2017-18 season in a fully staged production at the Theater St. Gallen. Her summer season involved two internationally anticipated world premieres: Donizetti’s L’Ange de Nisida (recorded for international release) at the Royal Opera House (ROH) and Franz Liszt’s newly discovered unfinished opera Sardanapalo with the Weimar Staatskapelle in August. She is quickly gaining a reputation for bringing newly discovered/rarely performed works to life. Her 2018/19 season brings her back home to the Canadian Opera Company (Tatyana, Eugene Onegin), to Opera Australia (Mimì, La bohème) for her company debut, and back to the Welsh National Opera for her continued exploration of Donizetti’s bel canto queens (Elisabetta, Roberto Devereux). Highlights of her 2017/18 season included performing Violetta (La traviata) at both Glyndebourne and the ROH, returning to ROH as Musetta in Richard Jones’ La bohème, a production she revisited in her Teatro Real debut in December. In concert, she opened the NDR Symphony’s season in a gala concert performance and debuted with the Moscow Philharmonic Orchestra.

Ms. El-Khoury’s discography includes two rare Donizetti operas (Les Martyrs and Belisario) conducted by Sir Mark Elder – both to critical acclaim. She also has a solo disc, ‘Écho’ with The Hallé conducted by Carlo Rizzi. All of Joyce’s recording projects have been with the Opera Rara label.

Recent engagements include debuting with the London Philharmonic Orchestra in Rossini’s Stabat Mater, and with Opéra National de Bordeaux as Leila in Les Pêcheurs de Perles. She also made role and house debuts with Opera Philadelphia as Liù in Turandot, and as Salome in Massenet’s Herodiade with Washington Concert Opera.  Violetta in La Traviata with the Canadian Opera Company in Toronto, Musetta in La bohème with the Bayerische Staatsoper in Munich and with San Diego Opera in Jake Heggie’s new opera Great Scott as Tatyana Bakst. Ms. El-Khoury garnered raves when she starred in the title role of Maria Stuarda at Seattle Opera, replacing an ailing colleague in addition to giving her own scheduled performances, in some instances singing back to back performances. On the concert stage, Ms. El-Khoury debuted with the Orchestre de Paris in Rossini’s Stabat Mater, under the baton of Jesús López-Cobos, and performed in concerts in Austria with Elīna Garanča, and in Spain with Juan Diego Flórez.

Born in Lebanon and brought up in Canada, Ms. El-Khoury earned her Bachelor of Music at the University of Ottawa. She received her Artist Diploma from the Academy of Vocal Arts in Philadelphia, and is a graduate of the Metropolitan Opera’s Lindemann Young Artist Development Program. She is a First Prize winner in many competitions including: the Loren L. Zachary Competition, the Opera Index Competition, the George London Foundation, and the Mario Lanza Vocal Competition.