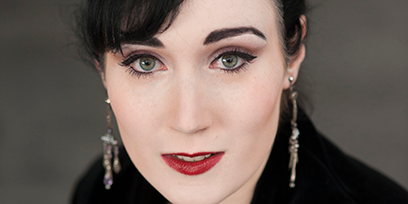 In 2021, Kathryn Radcliffe sang Leila in Victorian opera’s production of The Pearl Fishers. For VO, she also performed The Blue Fairy in Respighi’s Sleeping Beauty and Echo in Kevin March’s new opera Echo and Narcissus. In 2022, she appears in Elektra for VO and is soprano soloist in Melbourne Symphony’s Messiah and Melbourne Bach Choir’s Creation.

She recently made her OA mainstage début – as Delia in Il viaggio a Reims.  For Victorian Opera, she has sung Berta in The Barber of Seville and The Queen in The Princess and the Pea; for Tasmanian Symphony – Frasquita in Carmen.

Winner of the 2014 Herald-Sun Aria, she starred the following year as Pamina in Opera Australia’s touring production of The Magic Flute and won the Opera Foundation Vienna Award.

In 2016, Kathryn worked for several months at the Vienna State Opera – covering a range of roles such as Pamina, Fiordiligi in Cosi fan tutte, Ortlinde in Die Walküre, Pousette in Manon, Echo in Ariadne auf Naxos and The High Priestess in Aida.  She made her Vienna debut in The Cunning Little Vixen.  Kathryn returned home to win one of Australia’s most lucrative competitions – the Opera & Arts Support Group Scholarship.

After earlier obtaining her AMusA in flute, she graduated Bachelor of Music with first class honours from the Victorian College of the Arts.

Other roles Kathryn has performed include: The Governess in The Turn of the Screw (Hawaii Performing Arts Festival); Ernesta in LOL Opera by Nina Sofo (Australian premiere 2010) and Daisy in Contact by Angus Grant (World Premiere 2011).  For OzOpera, she has sung Mother/Witch/Sandman in Hansel and Gretel and Queen of Night/Pamina in The Magic Flute.