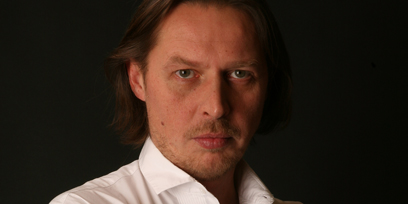 Born in Tambov (Russia), he obtained his degree in voice from the Conservatoire Tchaikovsky in Moscow  and made his opera debut 1993 in Nabucco at the  Bregenz Festival.


Konstantin Gorny performed the main parts of the Italian, French and Slavish repertoire on important international stages. In 2004, his extraordinary vocal and acting abilities let him the title of “Singer of the Year”, assigned by the magazine “Opernwelt” for his outstanding performance of Boito’s Mefistofele.


Since 1997 he is a company member of the Staatstheater Karlsruhe, where in 2006 he has been nominated “Kammersänger”.


In 2001 he has been in Barcellona in the fabulous production of I puritani with Edita Gruberova (recorded also on DVD).In 2002 he has been involved in The Maid of Orléans (Tchaikovsky) with Mirella Freni and afterwards in Macbeth conducted by Bruno Bartoletti in Turin, in the Verdi Gala, in Parma, under the baton of Zubin Mehta with Plácido Domingo, José Carreras, Leo Nucci and Ruggero Raimondi. In 2006 the production Les contes d'Hoffmann directed by Giancarlo Del Monaco, in which performed all the evil characters, has been edited in a lucky DVD.


His repertoire includes also ‘Sarastro’ in Die Zauberflöte, ‘Oroveso’ in Norma, ‘Raimondo’ in Lucia di Lammermoor, the title role of Attila, ‘Silva’ in Ernani, ‘Fiesco’ in Simon Boccanegra, ‘Padre Guardiano’ in La forza del destino, ‘Kochubey in Mazeppa (Tchaikovsky) as well as ‘Massimiliano’ in I Masnadieri and  ‘Alvise Badoero’ in La Gioconda.


In 2009 Konstantin Gorny made his successful debut as ‘Filippo II’ in a new production of Don Carlo in Karlsruhe and has been highly acclaimed in Evgenij Onegin and Don Giovanni in Stuttgart, Rigoletto at the Maggio Musicale in Florence, Mozart e Salieri (Rimsky-Korsakov) and Mefistofele in Montpellier and debuting in the role of ‘Zaccaria’ in Nabucco at the Teatro La Fenice in Venice.


Engagements 2011 were Les Troyens in Karlsruhe and ‘Fiesco’ in Simon Boccanegra in Buenos Aires, ‘Zaccaria’ in Nabucco at the Vienna Staatsoper. In 2012 he sang Anna Bolena, in Florence, and Rigoletto in Las Palmas.


In Summer 2012 he has been Il Re in Aida at the Arena di Verona and ‘Timur’ in Turandot, in Florence. In April 2013, sang ‘Gremin’ in Eugenij Onegin at the Vienna Staatsoper, and Zaccaria in Nabucco, in Tokyo. In summer 2013 he will return to the Arena di Verona for Nabucco and Rigoletto, subsequently he will perform in La Vestale at the Théâtre des Champs-Élysées in Paris. Engagements of 2014 include Rigoletto in Strasburg, Eugene Onegin in Sydney and La Gioconda in Marseille.