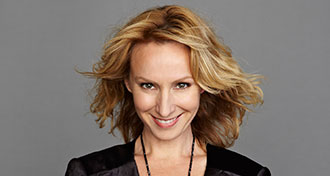 Lisa McCune is one of Australia’s most successful screen and theatre actors, earning an impressive collection of awards, including ten Logie Awards, four of them Gold for Most Popular Personality on Australian Television.


At age 17, Lisa was accepted into the Western Australian Academy of Performing Arts and after graduating with a Bachelor of Arts degree shot several television pilots before landing the role of Maggie Doyle in the police drama Blue Heelers. The show went on to become one of the most popular and enduring programs in Australian television history and made Lisa a household name. During this time, she played the role of Mary Abacus in the Seven Network mini-series The Potato Factory and appeared on stage as Cinderella in Stephen Sondheim’s Into The Woods and as Anne Egerman in A Little Night Music, both for Melbourne Theatre Company.


Lisa then starred as Maria in The Sound of Music for the Gordon Frost Organisation, which she followed with her Green Room Award-winning performance as Sally Bowles in Cabaret. She also received nominations for a Helpmann Award and Green Room Award for her performance as Hope Cladwell in Urinetown. Other stage credits include Olive Ostrovsky in The 25th Annual Putnam County Spelling Bee, Dead Man’s Cell Phone and Guys and Dolls for the Ambassador Theatre Group.


Her screen credits include Little Fish, the highly acclaimed medical series MDA, Two Twisted, the UK/Australia co-production Tripping Over, Rake and telemovie Hell Has Harbour Views for which she received a Silver Logie Nomination for Most Outstanding Actress.


Lisa starred in five series of Sea Patrol and in the telemovie Blood Brothers. In 2013, she appeared in Reef Doctors on Channel 11, It’s a Date for the ABC, as well as on stage in Eddie Perfect’s Shane Warne The Musical. She also filmed a role in Josh Lawson’s debut feature film, the highly anticipated Little Death.


Lisa comes to The King and I after playing Nellie Forbush in the Australian tour of South Pacific for Opera Australia.